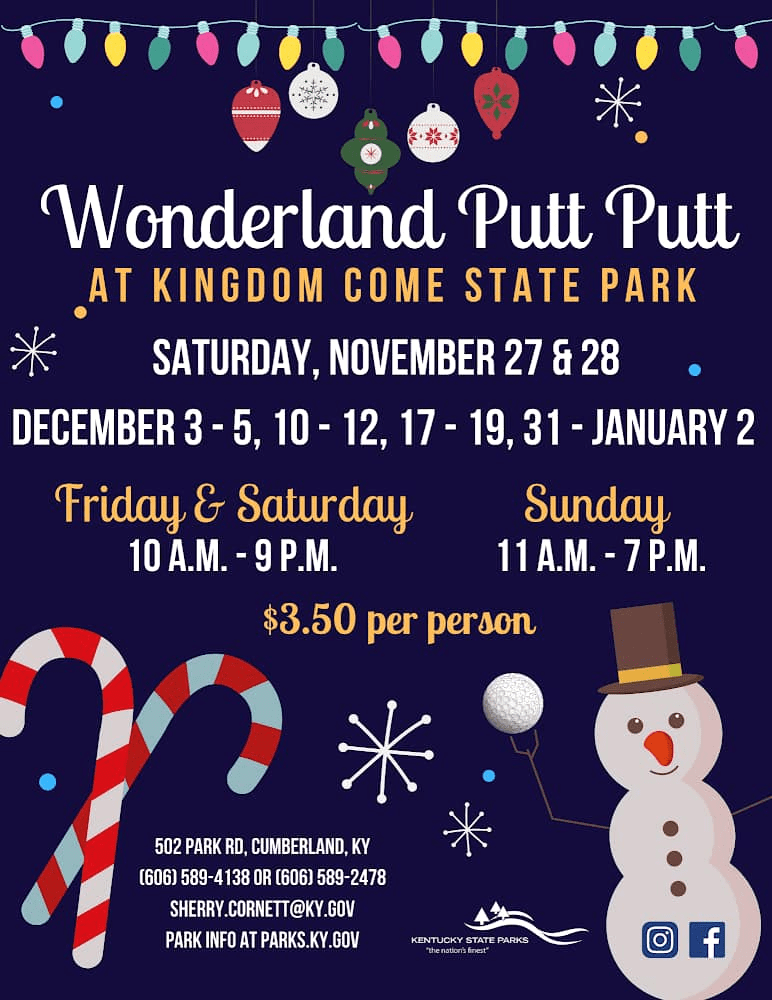 Looking for something different to do for the upcoming holiday season? Kingdom Come State Park is offering Wonderland Putt Putt, a Christmas themed miniature golf experience for the young and young at heart.

“What we are doing is we’re going to open up Wonderland Putt Putt the Saturday and Sunday after Thanksgiving,” Cornett said. “Then, it will run every weekend through December except for Christmas Eve and Christmas Day.”

According to Cornett, Putt Putt Wonderland will operate from 10 a.m. until 9 p.m. on Fridays and Saturdays and 11 a.m. until 7 p.m. on Sundays. Admission is $3.50 per person.

“We have thousands and thousands of Christmas lights everywhere on the miniature golf course,” Cornett said. “We have Christmas decorations up, it’s pretty amazing actually.”

Participants will be playing through an extensively decorated course, all following the Christmas theme.

“We have a sound system playing Christmas music throughout the whole day,” Cornett said.  “We also have elves walking around, hot chocolate and Christmas cookies, we’re just kicking off the season with a little Christmas activity.”

Cornett pointed out the course utilizes all the Christmas lights they could find.

“Everybody likes Christmas lights,” Cornett said. “So, we put as many lights as we could get on the course and the gift shop.”

She added the walking trail is also being decorated.

“I’m still working on the details, but I’m also hoping to offer a photo opportunity,” Cornett said. “We have more activities planned, it’s just how much we can get done before December gets here.”

The idea for the Christmas themed activity came about after the facility was decorated for Halloween, which received a positive reaction from the public.

“We did Haunted Putt Putt, and it was a huge success,” Cornett said. “We did it every weekend in October and people were waiting in line 30 minutes to get a golf club. Once I saw how well that did, I just had to transform it into a winter wonderland.”

Cornett mentioned Recreation Assistant Megan Falce was also on board with the idea and provided a large amount of input to make the project a reality.

Cornett mentioned the Gift Shop will be able, with all sorts of merchandise available.