HC knocked out of KHSAA playoffs 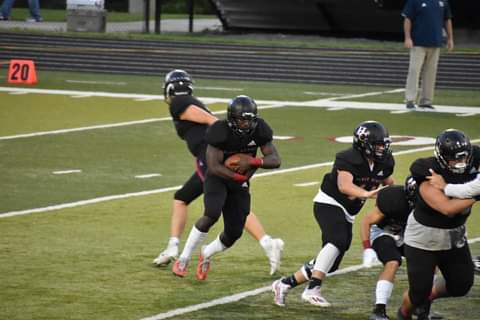 Harlan County senior running back Demarco Hopkins took the hand off from Ethan Rhymer. Hopkins ran for 171 yards, including a 75-yard touchdown, as the Bears gained 332 yards on the ground. (Photo by Chandra Howard)

It might have been the best performance by the Black Bears this season.

Perry Central opened the scoring with 2:46 remaining in the first quarter as McKenzie scored on a 1-yard touchdown run.

HC sophomore quarterback Ethan Rhymer scored on a 1-yard keeper at the 8:17 mark of the second period. Carr added the two-point conversion as the Black Bears led 8-6.

The Commodores fought back as McKenzie connected with senior receiver Kameron Maggard for a 38-yard TD pass. McKenzie’s two-point conversion run made it 14-8.

HC used one play to score as Hopkins raced 75 yards for a touchdown. Carr’s two-point run gave HC a two-point advantage with seven minutes left in the first half.

Rhymer found Jonah Swanner for a 7-yard touchdown pass with seven seconds left before halfime. The game was even at 22-all.

With 8:58 left in the third quarter, McKenzie scored from the 8. Freshman Ian Montgomery kicked the extra point as the Commodores took a 29-22 lead.

The Black Bears responded with an 11-play, 61-yard drive as Carr capped the drive with a 2-yard run. A questionable call on the two-point conversion. Officials said Carr missed the end zone by inches as PCC led by a single point.

The Commodores closed the scoring early in the fourth quarter as senior Kobee Eldridge scored from the 2. Montgomery’s extra point made it 36-28.

Harlan County had a chance in the closing period. Consecutive first downs by Carr moved the ball deep into Perry Central territory, but a fourth-down situation came up short by Rhymer at the 15.

The Commodores were able to run out the clock.

“You always hate to lose, but I feel great about the effort tonight,” said Harlan County coach Amos McCreary.

Harlan County (2-7 overall, 0-4 district) will close its season on Friday traveling to Log Mountain to face the 7-2 Bell County Bobcats.

The Black Bears will miss the playoffs for the first time in school history.

The Golden Eagles will play host to Clay County while the Commodores will visit Letcher Central in the KHSAA Playoffs beginning Nov. 5.