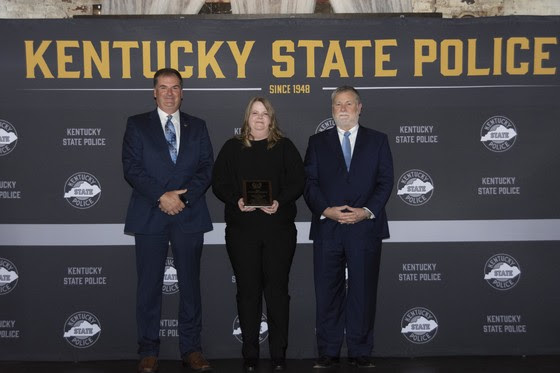 The Kentucky State Police (KSP) held its annual civilian awards ceremony in Midway to honor 14 civilian employees who have excelled in public service and dedication to the agency. The achievement awards presented were for accomplishments that occurred during 2020.

During the ceremony, KSP Commissioner Phillip Burnett Jr. said civilian employees are critical to the agency’s success, and it’s important to recognize their dedication.

“The extraordinary work ethic and commitment to our agency by our civilian employees greatly contributes to the KSP mission on a daily basis,” said Commissioner Burnett.

Commissioner Burnett and Kentucky Justice and Public Safety Cabinet Secretary Harvey presented Harlan County resident Melissa Halcomb with the 2020 ‘Post Operations Support’ Award. Halcomb serves as an Administrative Specialist at Post 10 Harlan and is a 9-year veteran of the agency.

Supervisor of the Year Award

KSP’s focus this year is to maintain and strengthen its essential workforce to provide increased public safety, maintain critical services and better reflect the diverse communities that KSP serves.