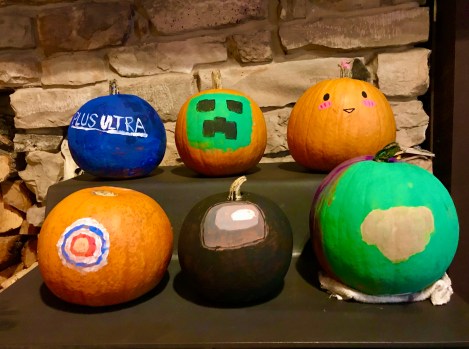 The origin of Halloween (originally All Hallows Eve) goes back to a Celtic holiday called Samhain (pronounced sow-wan), meaning summer’s end.  From sundown Oct. 31 to sundown Nov. 1 was a time to honor the memory of loved ones who had died, because it was believed the veil between their realm and ours was at its thinnest at that time.  It was considered a magical night and was also referred to as All Saint’s Day.  Over the centuries, the religious significance of this holiday faded, and it has become spookier and greatly commercialized.

During Samhain, Celtic folk hollowed our turnips and placed a lighted candle inside to ward off evil spirits. This may have been done to mimic strange lights that could often be seen in local peat bogs and were thought to be spirits. The lights were named “will-o-the-wisp”, or “Jack-o-lanterns”. When Irish settlers arrived in America, they found the pumpkin to be larger and easier to carve.  Pumpkins are native to the western hemisphere and were unknown in Europe before early explorers took seeds back home. Another possible origin of Jack-o-lanterns is a folk story about a farmer named Jack who tricked the Devil into not taking his soul when he died.  But Jack was too sinful to enter Heaven and was forced to roam the Earth as a spirit and used a burning coal inside a turnip to light his way.

Trick-or-treat, the tradition of going door-to-door to collect candy, started in Ireland hundreds of years ago.   Groups of farmers would go throughout the community to collect food and other items for a village feast and bonfire to celebrate Samhain.  Those who donated received a prayer for prosperity; those who did not received a curse for bad luck.  When Irish Catholic immigrants came to the United States in the 1800s, the custom came with them.

The pumpkin is the iconic symbol of fall, widely used for decorating as well as Halloween carving.  It is one of the oldest cultivated plants known, going back over 5000 years in Central America. It was a critical food source for early European settlers because it stored so well for winter use.

Steve Roark is a volunteer interpreter for the Cumberland Gap National Historical Park.