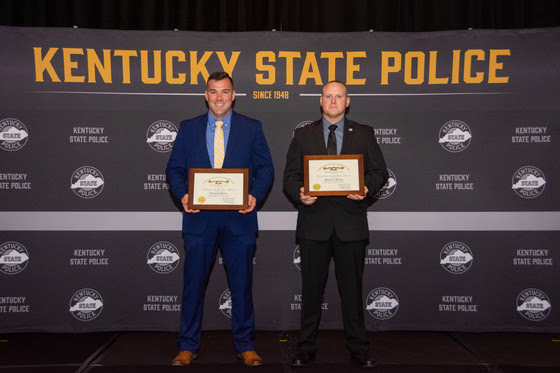 HARLAN – On Sept. 30,  Kentucky State Police held the annual sworn awards ceremony in Lexington to honor 55 troopers and officers who put on a uniform each day to patrol Kentucky’s neighborhoods with a mission of serving and protecting their fellow citizens. The achievement awards presented were for acts of service that occurred during 2020.

KSP Commissioner Phillip Burnett, Jr., spoke during the ceremony thanking troopers and officers for going beyond their regular job duties to protect and serve the citizens of the commonwealth.

“Our troopers and officers put themselves in harm’s way every day, but these acts of heroism and service stand above the normal call of duty,” said Burnett. “Each of these recipients has demonstrated both bravery and self-sacrifice in protecting the citizens of the commonwealth.”

Two Troopers from the Post 10 area were included in those honors.

Detective Andy Soltess was named 2020 Post 10 Detective of the Year. Soltess is an eight-year veteran of KSP assigned to Post 10 as a detective in Harlan County.

Trooper Sidney Wagner was named 2020 Trooper of the Year for Post 10 Harlan. Wagner is a four-year veteran of KSP assigned to Post 10 as a Trooper in Knox County.

Post 10 Commander Ryan Catron said he is proud of the commitment and efforts of these units.

A complete listing of award recipients can be found here.

KSP’s focus is to maintain and strengthen its essential workforce in order to better provide public safety, maintain critical services and better reflect the diverse communities that KSP serves.