Local gym members compete in Battle of the Fittest 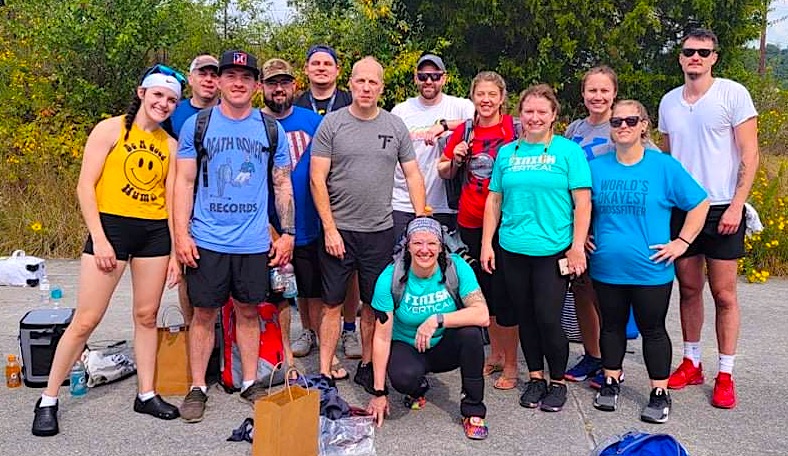 A local gym recently left home to compete at a crossfit competition in Johnson City, Tenn., where they lifted more than just weights as they encouraged their teammates all the way to the finish line.

Planting itself into Harlan County’s business community in late 2020, Finish Vertical has continued to bring a new, upbeat fitness routine to locals throughout the mountains.

Known as “functional fitness,” the gym helps train its members’ muscles to work together and prepare for their daily tasks by performing movements commonly used at home, while at work or even in sports.

Over the course of the weekend, Finish Vertical goers put their bodies to the test at the two-day Battle of the Fittest competition hosted by Mountain Top Crossfit in Johnson City, Tenn.

The two male teams that competed in the scaled division consisted of team “Carbs and Chaos” (Geary Ferguson, Colby Goss and Justin Luttrell) and “WOD Did We Get Ourselves Into?” (Travis Freeman, Brandon Pennington and Treyce Spurlock).

Both male teams made top three, with “Carbs and Chaos” placing third and “WOD Did We Get Ourselves Into?” placing second.

Howard finished the event with a tie for first place overall in her division.

“We are so incredibly proud of all of our athletes that competed and placed in the Battle of the Fittest 2021 competition. Our gym has not even been in Harlan County for a year, and our athletes are showing up to competitions, giving it their all and showing what Harlan Countians are made of,” a post on the Finish Vertical Facebook page read. “We are more than just a gym, we are a family, and we support, uplift and encourage each of our members to become the best version of themselves through our functional fitness training.”

Owned by Geary and Brandy Ferguson, Finish Vertical is an inclusive gym open to individuals of all fitness levels, modifying workouts to adjust to different fitness levels or body type.

Learn more about Finish Vertical by visiting the gym’s Facebook page or by calling 606-505-5711.