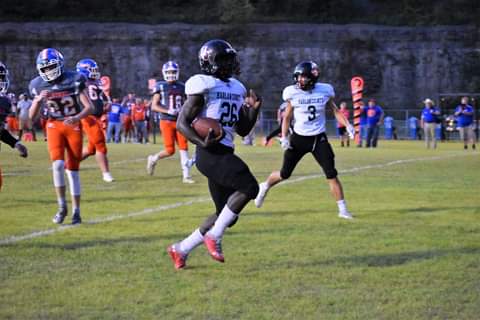 The Black Bears did just that in a game featuring 14 touchdowns – including eight by the Bears – in a 60-38 victory for HC.

Harlan County gained 433 yards on the ground to break a three-game losing streak.

The Hawks, who dropped their fourth consecutive game, also got 121 yards and a pair of touchdowns from freshman running back Matt Anderson.

Pike Central started the offensive battle, scoring on an 82-yard TD run by Boykins with 6:16 left in the opening quarter.

The Black Bears fought back. Following a 43-yard kickoff return by Jonah Swanner, Hopkins scored four plays later on a 14-yard run at the 4:28 mark. Hopkins’ two-point conversion run actually gave HC the lead for good at 8-6 after one quarter.

Jason Fultz recovered a fumble as HC needed just three plays to score as Hopkins raced 67 yards for a TD with 11:21 remaining in the half. Hopkins added the conversion run to make it 16-6.

The teams combined for 42 in the second period.

Swanner took the kickoff and raced 67 yards for a touchdown. Hopkins’ run made it 24-12.

Facing fourth-down-and-two on its on 48, Harlan County went for it, giving the ball to Hopkins, resulting in a 52-yard touchdown run, making the score 30-18.

The Bears held PCC on downs before scoring again. Three plays later, Carr broke free for a 64-yarder with 1:39 to play before the half. Hopkins added the conversion run.

Both teams would score on their first three possession of the second half.

Boykins connected with Billy Bush for a 45-yard TD pass at the 9:04 mark of the third quarter. Boykins’ run pulled the Hawks within 38-26.

Harlan County fought back with a four-play drive as Hopkins went in from the 6. Carr added the run.

Pike Central scored on a 42-yard TD pass from Boykins to Anderson with 2:40 remaining in the period.

The Bears used a four-play drive to score as Hopkins added a 1-yard run. The drive was highlighted by a 49-yard run by Carr.

With 6:39 left in the game, the Hawks scored their final touchdown as Boykins went in from the 2.

Harlan County added its last TD at the 1:40 mark on a 6-yard run by Hopkins. Ethan Rhymer connected with Swanner for the two-point conversion.

Junior linebacker Josh Sergent powered the HC defense with 16 tackles. Swanner, a sophomore, followed with 10. Zack Potter and Thomas Jordan each had seven tackles while Will Cassim added six.

Jordan and Cassim each had an interception for the Black Bears.

Middlesboro too much for the Dragons