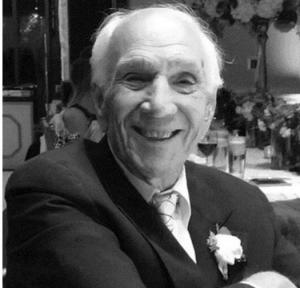 On August 30, 2021, Rodney Everett Buttermore, Sr., 98, passed away in Fort Worth, Texas, at home surrounded by his loved ones. Surviving are his son Rodney Buttermore, Jr. and his wife Julia, his three grandchildren Rhett Buttermore, Ross Buttermore and his wife Emily and Medley Sabadie and her husband Blake, four great-grandchildren, his brothers Tommy Buttermore and his wife Sharon, Dalton Buttermore, his sister Ruth Alice Pope and her husband Dan. He was preceded in death by his beloved wife Margaret, his son Michael, his brothers Dr. Willard Buttermore and Harry King Buttermore, Jr. and his sister Mary Jean Loving.
Rodney was born on November 29, 1922 to Dr. Harry King and Nelle Katherine Buttermore at Liggett, Kentucky. In 1940 he graduated from Hall High School, then matriculated at Transylvania University from which he graduated in 1946 and where he became a member of Pi Kappa Alpha Fraternity. During World War II, he served in the United States Army from 1943 to 1945 in France, Belgium and Germany, attaining the rank of Private First Class. On June 12, 1946 he was married to Margaret Spiegel of Birmingham, Alabama. They were united for 56 years until her death in 2002.
Rodney worked first in the family coal mining business, Elcomb Coal Company, then operated Rebel Coal Company and M & A Coal Company. Subsequently he became Mine Superintendent for Regional Coal Company and Terry Glen Coal Company before retiring in 1982.
Rodney was a long-time member of the First Presbyterian Church of Harlan. He was an avid player of golf and tennis as a member of the Harlan Country Club. He was also a member of the Harlan Lions’ Club, where he performed in many musical productions.
His life will be commemorated at a memorial service at Resthaven Cemetery in Keith, Kentucky at a date to be determined later.
In lieu of flowers, memorials should be made to the First Presbyterian Church of Harlan, Kentucky or the Camp Blanton Trust, P.O. Box 931, Harlan, Kentucky 40831.
The Buttermore family is being assisted by Harlan Funeral Home.