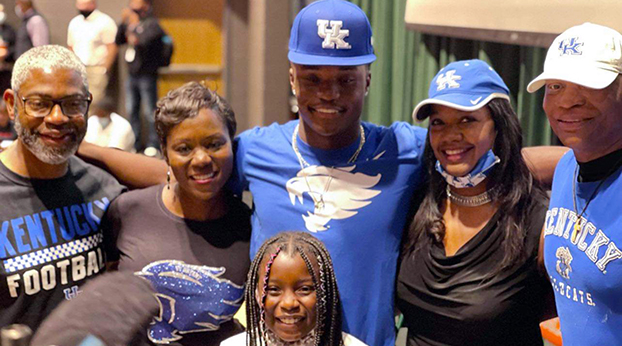 Ty Bryant, center, with his family after he announced his commitment to Kentucky.

It is no surprise that Frederick Douglass junior Ty Bryant is a terrific tackler and will soon be the all-time leading tackler for the Broncos.

He started learning how to tackle when he was 3 or 4 years old and his father, former Bowling Green High School and University of Kentucky player Cisco Bryant, started teaching him how to tackle.

“He always talked about stepping on their toes and wrapping up. I have worked on that since I was 3 or 4. I take pride in tacking,” said Bryant. “I like the ball in my hands the most but I really like tackling too.”

Kentucky is counting on him to be tackling a lot in the future after he recently made his verbal commitment to the Wildcats. He grew up a Kentucky fan and says he knew after attending UK’s summer camp that he was going to be a Wildcat.

“I just wanted to go ahead and lock in my spot so I could just have fun and play football the next two years,” Ty Bryant said. “Growing up in Lexington you see a lot of things Kentucky has to offer and I just wanted to officially be part of the family.”

Ty Bryant is taking the do-over year since he turned 17 only two days before the season started.

“It’s more for the development of my body. It’s not mentally. I am ready mentally but staying back another year lets me get bigger, stronger and faster. I want to have an impact as a true freshman,” Bryant said. “I want to be the best DB (defensive back) bar none when I get to Kentucky. This way I will continue to train with my dad and get bigger, stronger and faster.”

His father, Cisco, was a receiver at Kentucky from 1983-85 under coach Jerry Claiborne. The former UK receiver said the workouts with his son were always short and never more than two or three times per week.

“After our workouts when he was little, he would go climb trees, ride bikes and hang out with his friends,” Cisco Bryant said.

The two were always competitive. Ty Bryant says his dad would never intentionally let him win anything.

“I remember when he coached baseball at Dunbar and we always raced from the parking lot to the locker room every day. We would get out of the car, close the door, and race,” Ty Bryant said. “It was always competitive. He would never let me win and he always pushed me. Growing up, me and him always have had a great relationship.”

His father also emphasized one other thing constantly.

“My dad preached hustle plays to me. If you watch almost any game a few guys always make hustle plays and I am one of those guys. I am eager to get to that ball no matter what,” Bryant said.

Ty Bryant has good relationships with UK freshmen Dekel Crowdus and Jager Burton, his former teammates at Douglass. He said he talked to both players about UK.

“Dekel was telling me how he was loving Kentucky and having the best time of his life,” Bryant said. “That did play a part in my decision. He’s one of my boys there now and he’s telling me that. A lot of people always thought I was going to Kentucky but there is a difference in thinking and knowing. Now I know it and everybody else knows it.”

Ty Bryant has played receiver for the Broncos and will be used at running back this season. His father says he’s good enough to be a Division I receiver.

“He is very blessed offensively and defensively. Defense is his love. He loves checking receivers. Everybody likes offense because people know your name quicker. I tell him he rents on offense and we buy the house on defense,” Cisco Bryant said.

“I am his dad and don’t say much but he is a student of the game and wants to be successful. He wakes up in the morning and works out. He wants to be great.”

Ty Bryant is also a successful baseball player —he has talked about playing both sports in college — and he will not graduate early to participate in 2023 spring practice at UK.

“I am going to play two more years of baseball,” he said. “I love it and my mom also said if you start something, you’ve got to finish it and that’s what I am going to do.”