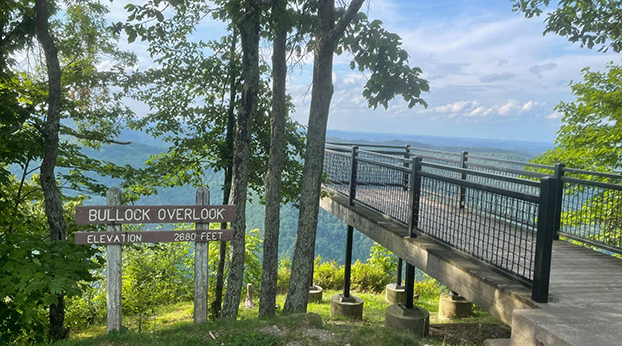 Bullock features one of the scenic overlooks at Kingdom Come State Park on the top of Pine Mountain. - Photo by Darla Jackson 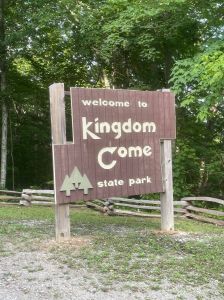 Kingdom Come State Park in Cumberland is now offering new campsites in addition to their its existing ones. One of the sites is for immediate rental, with five more nearly under completion. As soon as all the six campsites are available, four more campsites will be developed. The new campsites will boast the prestige of being on the highest altitude of any state park in Kentucky and visitors can camp “on the highest elevation of the Kentucky State Park system.”

The 10 new campsites will join the eight existing, providing a total of 18 camping options. This comes after a 587% increase in camping rentals for the last fiscal year at the park.

Sherry Cornett, park manager, says that the camping rentals have increased every year, but last year was by far the greatest. She attributes this to promotion and advertising. Upon her arrival as park manager, there were four campsites available. She developed four more supplied with electrical hookup, and those four located near the lake are in high demand and nearly always in use.

Kingdom Come State Park will soon be providing visitors with overnight stay options in the form of primitive cabins. Until now, the only option for staying overnight in the park was primitive campsites. The primitive cabins will be located near Bullock Overlook, one of the popular scenic overlooks at the park. Construction of the cabins will be determined upon exact funding of the project. $200,000 has been secured for the budget through various donations and grants, including Harlan Fiscal Court, Robert E. Frazier Charitable Foundation, Cumberland Tourism, and Friends of Kingdom Come State Park. Many local residents have also donated and created fundraisers for the cabin construction project.

There is a probability that the Kentucky Department of Parks Land and Conservation fund will match the awarded grant, thus doubling funding. The hope is that $400,000 can be budgeted for the cabins and construction can begin late fall 2021. 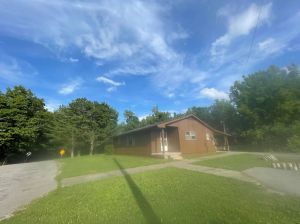 Kingdom Come State Park will soon be providing visitors with overnight stay options in the form of primitive cabins. – Photo by Darla Jackson

The cabins will have electricity and will share a centrally located bathhouse that will provide restrooms and showers. The bathhouse will be added to an existing cabin that will also be used for overnight rental. The bathhouse is in close proximity to the cabins for the convenience of overnight guests. The existing cabin will have bunk beds and will be large enough for small groups. The new cabins will have electricity, front porches, and fire rings.

Kingdom Come State Park is located on top of Pine Mountain and near the city of Cumberland. It was founded in 1961 and was named after the 1903 Civil War novel, The Little Shepherd of Kingdom Come by Kentucky author John Fox, Jr. Its attractions include Raven Rock, a massive rock exposure that soars 290 feet in the air, Log Rock, a natural sandstone bridge, and because it is the highest altitude state park in Kentucky, its scenic overlooks including Creech and Bullock are unsurpassed for its breathtaking beauty.