Adebayo says UK helped him get to Olympics 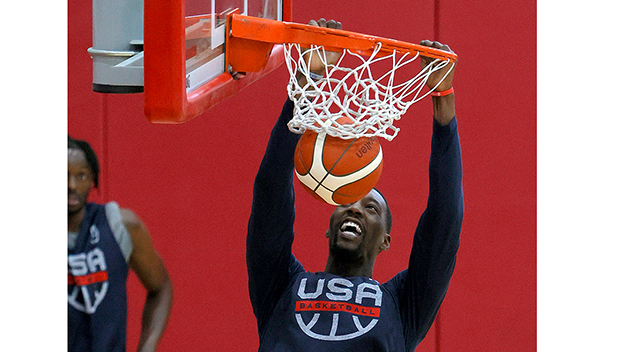 Bam Adebayo, who will play in the Olympics later this month, said he learned accountability at Kentucky. (USA Basketball Photo)

Bam Adebayo says his one year at Kentucky is a big reason he’s part of the U.S. Olympic team.

“It showed me how to be held accountable,” Adebayo said about UK during a USA Basketball teleconference

“That was the biggest thing coach Cal (John Calipari) emphasized in practice and games. You’ll always be held accountable because at the end of the day, you all are on the floor. You are responsible. And you all have got to get the job done.

“Accountability is the biggest thing I took from Kentucky. It got me this far because I take a lot of (responsibility) for certain things that happen on the court or how we’re playing.”

Adebayo said he’s used to rigorous offseason workouts so he’s ready for the Olympic grind that starts later this month.

“That’s one thing I do in the offseason. I put my body through the wringer so I can be prepared for whatever task I have at hand,” he said.

Several former UK players are working out against Team USA to prepare it for the Olympics and Gonzaga coach Mark Few has liked what he has seen from them.

He cited how easy Keldon Johnson is to coach and how “quickly he picks up on things” daily.

“He’s a quick learner and just so solid. Good feel for the game. Good size. Good finisher,” Few said before Johnson was selected to stay with Team USA through the pre-Olympic exhibition games.

The Gonzaga coached called Immanuel Quickley a “bolt of energy” and joy to have on the team he’s coaching.

“I guess I would describe it as youthful exuberance,” Few said. “His decision-making has been just rock solid.”

“So willing and so ready. And just gives great effort. One of those forwards who can do a lot of things,” Few said.

Tyler Herro, Adebayo’s teammate with the Miami Heat, is also on the team practicing against the Olympic team. He knows what a great experience it is for him and Adebayo both.

“I think I can, obviously, take a lot from it. And Bam is obviously Bam. I just think the whole Olympic Team is filled with obviously great players that are very well accomplished in this league and I think that I can just take away really anything from any of those guys where I can just pick their brain and just soak in as much as I can throughout the week,” Herro said.