Washington has worked to get ready for college 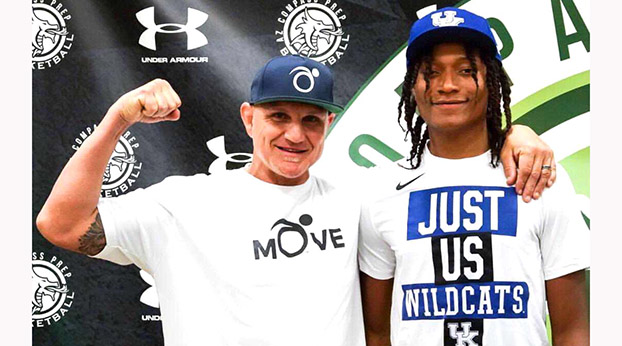 Trainer Chad Dunn says UK freshman TyTy Washington was willing to work to redefine his body and improve his defense to prepare him to play at Kentucky.

After his team lost its final game in the 2019-20 season, guard TyTy Washington went to his head coach at Arizona Compass Prep and asked what he had to do to work on his body.

“The next day he was going to work,” said Chad Dunn, who has over 20 years of experience in the health, fitness and sports performance field.

Washington found himself working out with athletes like quarterback Tyler Shough, who played three years at Oregon before transferring to Texas Tech, and Washington State quarterback Gunner Cruz.

“He was working out with other Division I guys. He’s such a true competitor. Most guys like that just like to go play. They don’t like to work out and lift. TyTy bought into what we were saying and changed his whole body,” Dunn, the co-founder of Move Human Performance, said.

Dunn spent about two years helping Washington redefine his body for college and that should help him on the court when Kentucky’s season begins because the freshman point guard got a head start on his development working with Dunn — who also worked with former UK receiver Kauyane Ross.

“Playing the high school schedule he did is demanding. College is easier in some aspects because he will have more time to rest and recover,” Dunn said. “Making sure he was able to play every game last year was a big thing. We had to educate him on the recovery side and not have him lift a lot of heavy weights because he’ll do that in college.

“But he works. Never play cards with him. He will never show you everything he has. He will always have something else to give you.”

Washington had plenty of athleticism. Dunn tried to help him move more efficiently. The trainer explained that boxer Floyd Mayweather Jr. is not the strongest boxer but moves so well. That’s what he helped Washington learn to do better.

“You want to teach these great athletes how to use their bodies more efficiently and what muscles to use. He will make big strength gains in college. I wanted to make sure he was flexible and mobile, and he is,” Dunn said. “All these kids are beat up in July, August and September from playing so much when they are in high school. You have to watch them.

“The one thing I try to tell guys like TyTy is that this is a business. He’s going to a new job at Kentucky. I got the strength program he was going to be using there and went over that with him. He was like, ‘I am ready for that.’ But I wanted to make sure he had a smooth transition at UK and then start doing what it would take to get to the NBA.”

Dunn said Washington accepted the value of taking care of his body and what preparation it took to do that.

“He is one heck of a kid. He has his own personality,” Dunn said. “He brings excitement to everything he does. The bright lights at Kentucky won’t bother him. He’s basically starting his career as an entertainer now and he entertains you when he’s on the court with the way he plays. He knows he is there to put on a show and if he does that his team has a great chance of winning.”

That’s why Washington wanted to improve his defense last year — and believes he did because of the work he put in with Dunn.

“The first thing they have to do is realize they cannot play that high school stuff at the next level. It is a man’s leg. You can’t shuffle.

You have to turn and run. We worked on lateral motion, explosion. He’s a great student of the game. He listens to every detail and uses what he learns,” Dunn said.

“He’s an electric scorer with great court vision. He listens, he leads. But he knew his defense had to be better and worked to make it better last year. If you are taking a car to a big car show, you don’t take it with dents. You have got to make sure it is polished up and that’s what he did by improving his defense.”