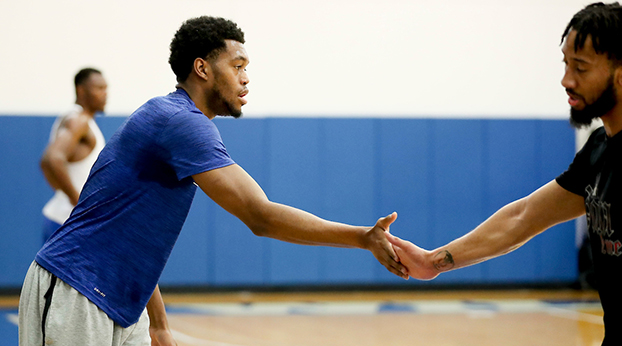 Keion Brooks, left, has spent time working on his 3-point shooting to keep from getting left behind with the way college basketball is changing. - UK Athletics.

Want more reason to believe that Kentucky coach John Calipari — who has added three skilled outside shooters in Kellan Grady, CJ Frederick, and TyTy Washington to his roster — is putting more emphasis on shooting next season?

Junior forward Keion Brooks Jr. provided that at a recent media opportunity when he was asked what he had been working on since last season ended.

“Continue to build on my versatility and the ability to guard multiple positions. I got to get better at shooting the 3, attacking people off the dribble, being more perimeter-oriented,” Brooks said.

“The game is changing. I don’t want to get left behind. I’ve got to change my game as the time’s come.”

Not get left behind is what Calipari seems to be doing, too, as he has indicated he’s looking for skills and shooting over athleticism.

Brooks gets that and also felt no pressure to leave UK after two years rather than return for another season to improve his game because Immanuel Quickley, PJ Washington, and Nick Richards did it and got rewarded in the NBA draft.

“They made it okay to come back and they’ve had great success here,” Brooks said. “My journey wasn’t to be one and done. It took me a couple of years. I’m just continuing to get better, keep doing that and hopefully, I can reach my dream.”