An innocent man is hanged in the mountains 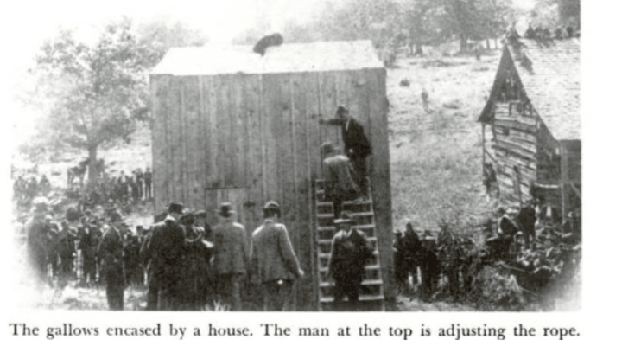 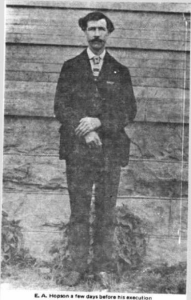 The trapdoor of the scaffold wasn’t working properly and Sheriff Wilburn Killen of Wise County, Virginia, beat on it for nearly 15 minutes as Eave Hopson waited on the gallows to be hanged. It was May 15, 1903.

Hopson seemed undaunted by the happenings as he chatted with a friend, J. F. Fleming, about his impending burial.

“Take me to Preacher John Mullins’ home after I’m dead,” Hopson told him. “I want to be buried close to my dad in our family graveyard.” Skeetrock is in Dickenson County.

The events leading to the hanging began when Hopson, Bob Mullins, and Enoch Wright were on an all-night drinking spree. When they became hungry they decided to steal a chicken and roast it over a fire. Eave climbed a tree to get a chicken, leaving his gun with Mullins and Wright.

John Salyers, who had recently moved to Wise County from Tennessee, ran outside when he heard the frenzied clucking from his chickens, and the shooting soon erupted. Salyers was mortally wounded.

William Dotson, commonwealth’s attorney, talked with the wounded man later that day and Salyers, before he died, described Hopson as one of the culprits.

“It is hard for me to go through this because I am innocent,” Hopson said later from the scaffold prior to his hanging. “This whole predicament I am in just doesn’t seem real. It seems like a dream, but day after day I just can’t wake up. In only a few minutes though, I will be with my Lord God in paradise. I am not uneasy about it because I will meet God in peace. Then there will be no more trials or trouble.

C. H. Patterson and J. A. Hughes, Hopson’s attorneys, remained at his side while Sheriff Killen worked on the death gallows.

Ironically, the sheriff had known Hopson since he was a baby and had tended him at times. Hopson asked that Deputy Sheriff Renfro perform Killen’s duties to relieve his long-time acquaintance, but Renfro refused.

When the repairs were completed, Hopson shook hands with everyone standing on the scaffold including the brother of the murdered man. Hopson was heard to say he was sorry that it had happened. He then stepped onto the trapdoor without hesitation, fear, or weakness.

Sheriff Killen adjusted the noose around his neck and asked Eave Hopson about the murder and if he had any final words.

“I’ll only say that I’ve done things in my life that I’m not proud of,” Eave Hopson replied, looking haggard. “When Salyers was shot and killed I had been drinking a lot, but I didn’t have a gun and I didn’t shoot nobody. God knows I am innocent. I did not shoot the man. God is with me. I hope to meet all my loved ones and all of you again in Heaven because you’ll know then that I was innocent. Goodbye.”

“Eave, may God have mercy on you and your soul,” Sheriff Killen said as a hood was placed over the prisoner’s face.
Hopson’s body plunged downward – suddenly jerking to a stop.

His neck wasn’t broken from the snap of the rope and the hood fell aside. An agonized look on Hopson’s face pleaded for relief.

The sheriff asked Dr. Miles to replace the hood. After it was replaced it soon fell again from the struggling man. Finally, Dr. Miles pinned the hood in place.

It took 36 minutes before they pronounced Hopson was dead. During that time Dr. Miles and two associates checked him periodically for signs of life.

The body was turned over to J.F. Fleming of Clintwood, who took the corpse by wagon from Wise to Dickenson County. Periodically they stopped along the road when residents asked to view the body. Rope burns were clearly visible on Hopson’s throat.

The other men received prison sentences. Enoch Wright was in prison until 1910 when he was pardoned. Later he was convicted on a charge of second-degree murder in another case and had to serve the remaining 17 years plus an additional 12 years.

Bob Mullins was the only one of the three to plead guilty and was imprisoned six years and nine months before being pardoned. He had no further criminal record during the remainder of his life, but it was told and retold throughout the mountains that before he died, Bob Mullins confessed to firing the shot that killed John Salyers and sent Eave Hopson to the hangman’s noose. Then it became known that Eave Hopson, an innocent man, had been hanged.

Jadon Gibson is a freelance writer from Harrogate, Tennessee. Thanks to Lincoln Memorial University, Alice Lloyd College, and the Museum of Appalachia for their assistance.