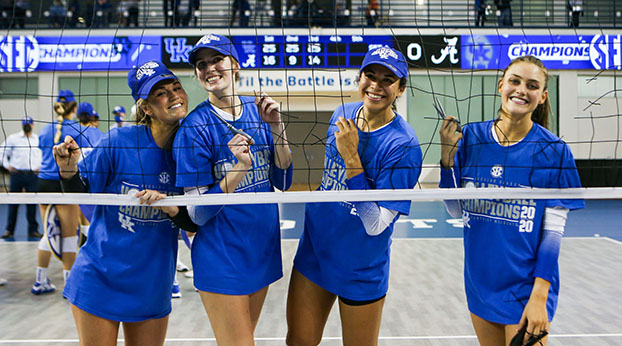 All-American Alli Stumler said UK seniors, from left, Gabby Curry, Kendyl Paris, Avery Skinner and Madison Lilley were as impactful off the court as they were on the court during UK's national championship season. (UK Athletics Photo)

Junior All-American Alli Stumler received a lot of attention for her NCAA Tournament play that helped propel Kentucky to its first volleyball national championship. However, she said never to doubt that this team belonged to seniors Madison Lilley, Gabby Curry, Avery Skinner, and Kendyl Paris.

“They knew this group could do it. They had big hopes and didn’t shy away from that. They inspired us all.”

Stumler also appreciated the sacrifices the four made for the team.

“They did not get a normal senior year,” she said. “To be so selfless and focus on all 15 team members and not just on their own future plans was special.

“All four of them are unbelievable people with the way they lead off the court. I can say I am a better human and volleyball player because of those four seniors. They didn’t worry about what they might be missing their senior year. Instead, they just worried about all of us and that’s why we won the natty (national championship).”

Curry said the four seniors are considering an autograph signing soon as a way to say thank you to fans for their support this season.

“Just a way to give back to all those who supported us,” Curry said.

Just how good could Nebraska transfer Wan’Dale Robinson be for Kentucky next season? The Wildcats certainly need a boost in... read more