Ky. breaks another vaccine record with nearly 200,000 in week 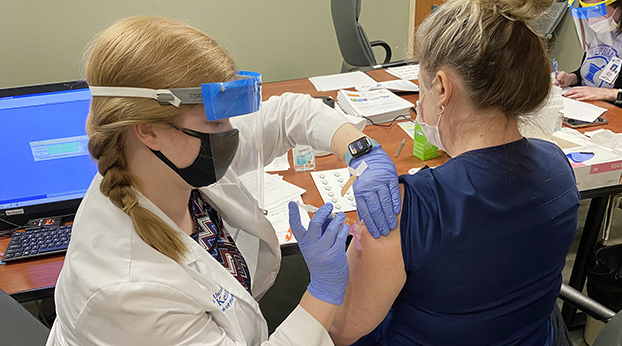 Gov. Andy Beshear announced Tuesday that Kentucky once again broke a weekly vaccination record, with 198,447 Kentuckians receiving their first shot during the reporting week that began on March 16.

The previously weekly record was 165,217 new Kentuckians receiving a vaccine in the week beginning on March 9.

Next week, Kentucky’s state vaccination program is projected to receive more than 142,000 first doses from the federal government.

For those who have been unable to get a vaccine appointment, the governor said Kentucky Dam Village in Gilbertsville had 2,000 appointments available Tuesday afternoon.  Other locations with availabilities include Pikeville Medical Center and the King’s Daughters Pavilions in Boyd and Carter counties.

A total of 893 new cases were reported to state public health officials on Tuesday, a sharp increase from the 294 on Monday.  The jump, however, is not that unusual, given the number of labs that are closed or don’t report on the weekends.

This raises Kentucky’s pandemic total to 421,999 since the first case was reported in Harrison County on March 6, 2020.

The state’s positivity rate on Tuesday stood at 2.93%, based on a seven-day rolling average.  That was the same as Monday, and the third day in a row it was less than three percent.

Eleven new deaths were reported on Tuesday, as well as four more from the ongoing audit of death certificates between November and the end of January.  That brings to 5,814 Kentuckians lost to the coronavirus.

The latest victims ranged in age from 44 to 89.  Six were from Jefferson County; two from Harrison County; with one apiece in Caldwell, Johnson, and Martin counties.

The four from the death certificate audit were from Greenup, Jefferson, Mercer, and Union counties, all of whom passed away during the month of December.

A total of 436 Kentuckians were hospitalized on Tuesday, two more than Monday.  Of them, 93 were in the ICU and 48 were on a ventilator, both of which were declines from the previous day.

Beshear says he, along with other governors, participated in a conference call Tuesday with the White House Coronavirus Task Force and Dr. Anthony Fauci.  “He provided an update talking about how the United States is now doing three million vaccinations per day, which he describes as ‘exciting’ and surpassing initial expectations.”

Beshear says Dr. Anthony so talked about three different directions on COVID-19 cases in the states.  “Some are seeing increases while some are seeing plateaus.  But he did talk about how there are states that have the right trajectory, we’re excited to be one.”

Gov. Beshear’s next scheduled press briefing on COVID-19 will be Thursday afternoon at 4, although his office is expected to release the daily numbers on Wednesday.