Details of plan for postal recovery scheduled for ‘imminent’ release 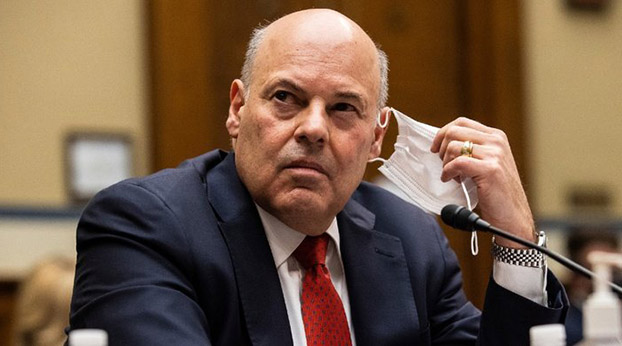 Postmaster General Louis DeJoy said Friday that the public can expect an “imminent” release of the details of a 10-year business plan to help move the United States Postal Service to a more solid financial footing.

DeJoy, speaking on a Zoom call to representatives from the National Newspaper Association, shared his perspective on the long-standing challenges that the cash-strapped USPS needs to address.

“We’ve had a difficult time at the Postal Service, but we are starting to see a recovery now. We’re hopeful that we are back to pre-COVID levels in terms of service,” DeJoy said.

A $40 billion investment for organizational and workforce improvements will soon be requested, and how that will be funded is included in the soon-expected 10-year business plan.

DeJoy noted the positives that USPS enjoys — it delivers to 161 million addresses every day. “We are strategically located … improving access to our whole network is our focus.”

Mail volume is the crosshairs of USPS management. “We are down to just under three pieces per delivery per stop,” he said, noting that is down from six pieces per delivery a decade ago. “We have a lot of opportunities. No one in the world matches our delivery network.” He added USPS is “trying to reclaim a formidable position in package delivery. We are focusing on how we engage our client base. We want to make it easier and be more widespread so we can hit localities quickly and efficiently.”

In surveying the issues that trouble the system, he said failure to retain career employees is high on the list of problems. He pointed out that USPS hired 200,000 people in the past year, but that did not increase its staffing total, candidly saying that a portion of the new workers was “less adequately trained doing routes.” One of his key goals is to stabilize and strengthen the workforce. “We have too high a turnover rate in our career workforce. That really needs to go down.”

Package volume — a profitable revenue source — has been overwhelmed. DeJoy said USPS delivered 1.1 billion packages during its peak, but there were 1.6 billion to be delivered and the “system was overwhelmed. We have never made the commitment to align our facilities to align with the volume. We had many oversized packages that our plants were not set up to do.”

DeJoy said improving retail operations is another major factor in improving the financial position of USPS. “We haven’t been investing in over 20 years. We want to look at where we are and make a few adjustments as far as locations. We want to make them more viable entities in the local communities.”

After losing $10 billion last year, and with projections for that number to increase significantly over the next 10 years, DeJoy said its network of air and ground transportation operates at under 70 percent efficiency. He pointed out USPS paid $5 billion in overtime the past year.

“Delivery, delivery, delivery — that’s very important to me. We want to look at our routes and get them optimized. We have an amazing network that we plan to use to capitalize on our growth.”

The postal chief said there has been a recent investment in new vehicles. “These are bigger than the older ones because we are carrying larger types of products. We are very excited about different opportunities we have to deliver.

“We have a growth plan that will improve service. Eventually, it is about financial sustainability, which is what the law is. We want to deliver six days a week and be self-sustaining. That is the direction we are headed right now.”

Several newspaper owners and publishers voiced concern over the lengthy delays that are encountered in getting newspapers delivered to subscribers. Brett Wesner, who operates newspapers in three states, said that mail delays, coupled with a rumored 6-9 percent increase in periodical postage, “would be devastating.”

“I understand that,” DeJoy said. “We are mindful of our role in the whole communication process in the country. I look forward in the benefits of our long-term plan to address costs and operating structure. You have something for us to deliver. We are going to be very sensitive to keeping our client base.

“We have to define what the postal system of the future is,” DeJoy added, saying a group of veteran postal workers helped put together the soon-to-be-released plan. “When you read it I think you will be happy. If we pull it all off, it will have the least impact on pricing.”

Max Heath, a Kentuckian considered to the guru of postal issues for the newspaper industry, pointed out that the last service change “caused loss of volume and promised savings. How will this change be different?”

DeJoy said “it’s all about execution. We need to make the commitment to execute and have resilience to move forward. When you look at the (last) service standard change, it was not achievable in the network we had. The organization ended up running more trucks. We’re not doing that. We want to design what we sell and sell what we are going to do. Our plan going forward is to produce reliable service and forecast issues moving forward. It’s going to get better. We have enough trucks running — our objective is to fill them. We are looking to optimize the network to drive more reliable, direct service and manage our costs.” He added that he doesn’t expect it “being a negative impact on periodicals (newspapers and magazines).”