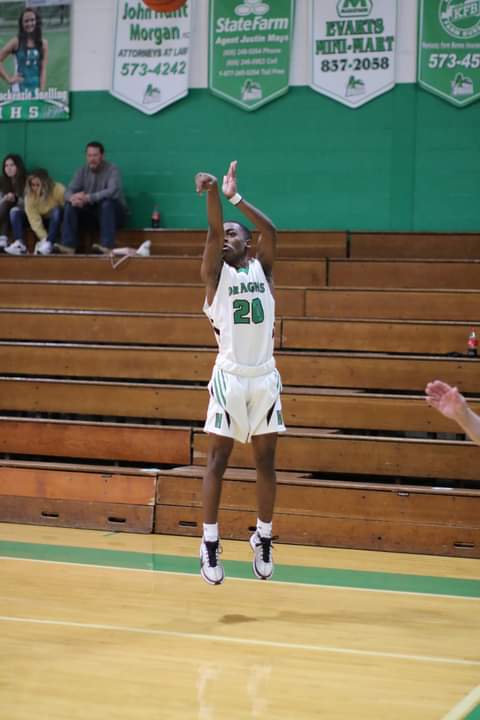 In January, the Harlan Green Dragons picked up a huge home victory, as well as the first-ever win over county-rival Harlan County. Harlan got its second biggest home win of the season on Tuesday defeating Clay County 83-73.

Harlan honored Trey Barnes before the game, and the senior came through with three 3-pointers and finishing with nine points and two rebounds.

“Trey kind of set the tone. He gave us come energy and confidence,” said Harlan coach Derrick Akal. “I also thought he played a good game at Pineville (last week).”

Harlan completed a perfect 8-0 record at home during the regular season. The Dragons will host the 52nd District Tournament next week.

Barnes hit his treys in the first quarter as the Green Dragons took a 22-17 advantage. Kaleb McKendon had eight points in the opening period.

Robinson scored 13 of the team’s 17 points in the first eight minutes.

Akal poured in 11 points in the second quarter as Harlan pushed the lead to 36-28 at halftime.

“I thought in the first half, we made some shots,” said Akal. We played great defense and made them take tough shots.”

Gist had eight third-quarter points and Akal scored five as the Dragons took a 64-50 lead into the final quarter.

The Tigers outscored the Dragons 23-19 in the fourth quarter. Harlan hit 12 free throws in the last period and escaped with a 10-point victory.

“When Clay made their run, we made enough plays on the defensive end and even on the offensive end,” added Akal. “I told them during one of the time outs tonight, we need this win.

For us to get the win at home against that kind of team, we’re happy.”

Harlan (12-5) travels to Leslie County on Saturday and visit Red Bird for a girls/boys doubleheader on March 9 to end the regular season.

Clay County (11-6) returns to action Thursday at Red Bird (0-14) and visits Covington Catholic on Friday. The Tigers will close the regular season at home, beginning with Middlesboro on Tuesday and concluding with Knox Central on March 11.

Kentucky Attorney General Daniel Cameron has joined a 21-state coalition in support of the constitutionality of the Tennessee law requiring... read more