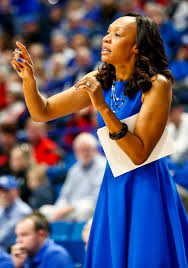 VAUGHT: Kyra Elzy – one of the top performers the state has ever seen

Over 25 years ago, when current UK women’s basketball coach Kyra Elzy starred at Oldham County High School in LaGrange, Ky., she was one of the top performers the state has ever seen in girls’ basketball action.

The 6-foot-1 Elzy was a two-time Parade Magazine All-American who scored 3,020 points (currently ranked 23rd on state’s all-time list) and grabbed 1,703 rebounds (ninth on the all-time list) in her prep career. She once poured in 35 points and snatched 33 rebounds in a regional tournament game.

A member of Kentucky High School Basketball Hall of Fame, Elzy was also a very good athlete as she participated in cross country, and track and field, becoming a state champion in the 400-meter dash during her junior year.

Elzy was so good in basketball that legendary coach Pat Summitt of Tennessee recruited her hard to play for defending national champion Lady Vols as a college freshman for the 1996-97 campaign. Before committing to UT early during the recruiting process, Elzy also considered the struggling Kentucky Wildcats, who had a new coach by the name of former UK men’s assistant Bernadette Maddox at the time, and Western Kentucky. The Lady Vols’ winning tradition was simply too good of an opportunity for her to pass up.

“Growing up, I wanted to go there,” Elzy said in a 1996 Lexington Herald-Leader article by Rick Bailey. “But, as I got older, I took a close look at other schools. I respect

Tennessee’s coaching staff and style of basketball, and I love the atmosphere.  I wanted to see them win (the national title in 1996), and I was thrilled when they did.”

Elzy added in a recent Zoom interview with the media, “It’s hard to say no to Coach Summitt, an icon. …It (Tennessee) was close to home, not far enough, but I wanted to play for Coach Summitt.”

In a 2013 book, titled “Sum It Up,” written by Summitt along with Sally Jenkins, the coach first noticed Elzy at her annual basketball camp when the young player was 14 years old. But the veteran coach didn’t really like what the player from Kentucky was wearing.  Elzy had displayed a Western Kentucky University T-shirt and Summitt warned her that future UT players don’t come to the camp with another college’s T-shirt on.

Summitt also said in the book that Elzy was a sweet kid but had “to get meaner” on the floor.

As it turned out, Elzy became the fifth freshman in UT history to start her first game as a Lady Vol in the 1996-97 season opener against Austin Peay as No. 4 Tennessee prevailed in an 80-59 win. (By the way, one of her freshman teammates at UT included Niya Butts, who is now an assistant coach at UK.)

During her five-year career at Tennessee, which included two national championships in 1997 and 1998 and a national runner-up (2000), Elzy played in 126 games and was named the Holly Warlick Defensive Player of the Year as a sophomore guard in 1997.  A classroom standout with a couple of SEC All-Academic honors, she also became the first UT player to earn her master’s degree while playing.

But things weren’t all that smooth for Elzy at UT. For instance, she once thought about quitting and go back home to Oldham County as Summitt was really tough on her especially during Elzy’s rookie year.

With Summitt’s never-ending work ethic, encouragement and influence, Elzy became a success in her post-playing career as she climbed through the coaching ladder. Before becoming the head coach at Kentucky several weeks ago with a new six-year contract, she served as assistant at several schools, including Tennessee and UK.

“This is a tough profession to be in,” said Elzy. “It is a lot of hours, but it’s very rewarding. I got into coaching originally because I wanted to inspire, impact and influence young women, and God has given me the platform to do so.”

Elzy also thanked Summitt – who passed away in 2016 at the age of 64 after battling an early onset Alzheimer’s disease for several years – for valuable guidance and support along the way.

“Coach Pat Summitt, rest in peace, Coach. I hope that I am making you proud today,” said an emotional Elzy after taking over the women’s hoops program where she had been the associate head coach during her second stint at UK. “If I can be half the woman and half coach that you were, I would be doing something with myself. Thank you for believing in me when I didn’t believe in myself, for instilling a mental toughness and work ethic in me that has helped me succeed.”

When in the heat of the moment during a game, Elzy said she’ll take her coach’s advice.

“I think Coach Summitt would say to remain poised, remain confident, but prepare,” said Elzy, who holds a bachelor’s degree in psychology and a master’s in cultural studies and education with an emphasis in sports psychology, both from UT. “Prepare for those moments, those situations. Not only have yourself prepared, but your team prepared, so we know what we’re doing and we’re confident in it. Preparation, that is what Coach Summitt would tell me.”

Elzy, whose Kentucky team is off to a great start this season, now ranking No. 10 in this week’s Associated Press Top 25 poll, is not the only SEC head coach who played for Summitt at Tennessee.

Elzy’s former teammate Kellie (Jolly) Harper is now the head mentor for the Lady Vols. The other ex-Lady Vols in the league are Nikki (Caldwell) Fargas, who is leading the LSU Tigers, and Nikki McCray-Penson, now in her first season at Mississippi State.

Needless to say, the well-liked Summitt, who posted an incredible mark of 1,098-208 with eight NCAA titles during her 38-year coaching career, would’ve been very proud of her former Lady Vols, including Elzy, who are now playing key roles in college basketball.

By Paul Lunsford Contributing writer Visiting Whitley County scored the first 13 points of the game to open the 2021... read more