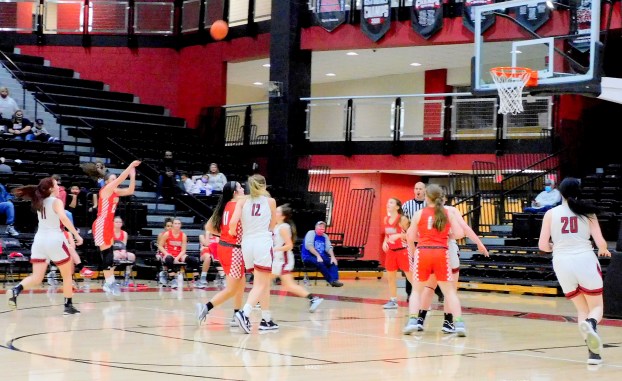 In a fast-paced battle to victory in Monday night’s season opener at Harlan County High School, the Lady Hounds brought their A-game to the court against the Lady Bears, who turned over possession to Corbin 27 times before a 80-44 win for the Hounds.

Sophomore Kallie Housley and senior Shelby Stewart, both guards for the Lady Hounds, tag teamed for a whopping 58 points for Corbin. Housley brought in 32 points, hitting 13 of 20 shots, and Stewart another 26 points, including four 3-pointers.

The Stewart-Housley duo scored for six in the first quarter to build a 20-10 lead, with Housley hitting another five shots in the second to contribute to their lead of 45-24 at the half.

In the third quarter, Harlan County made one of nine shots before the Lady Hounds pulled away further for a score of 61-31.

Having returned as the Lady Bears head coach in May 2020 after six years off from coaching, Anthony Nolan said there weren’t many achievements made in Monday night’s game against the Corbin Lady Hounds, noting turnovers as one of Harlan County’s downfalls in their season-opening game.

“We played afraid, instead of being the aggressive team we usually are. We played to [Corbin’s] strengths, letting them get a lot of easy shots,” he said. “It’s one of those things we’re going to have to work through.”

Nolan said he believes a lot of the team had first-game jitters after starting practices a week late.

“Not to make any excuses, but there’s so many unknowns with this season going in, having to start and stop and having a month off. We only had about eight practices until we played tonight. We were skeptical of whether or not we’d even get to play,” he said.

With the blessing of being able to play this year, Nolan said he hopes the Lady Bears will come out with more effort and pride at their next game than they showed Monday night.

“I don’t think we’ve had a leader that has popped up yet. We’re still looking for that, and hopefully, we find it pretty quick because we need some people that will step up, communicate and be a leader out there on the floor,” he said. “We still lack a verbal leader, but it’s just the first game. We will find that someone and get better.”

Corbin Lady Hounds Coach Isaac Wilson said he is mainly focused on the blessing of a basketball season this year.

“You know, these girls work really, really hard, and we do have a lot of girls who put a lot of time and effort into basketball,” he said. “Just seeing all of them, not just one, but the whole team have an opportunity to play the game they worked so hard for fills me with joy.”

Wilson said the past few months have been filled with negativity and isolation with the onset of the coronavirus, but to let his team play is one thing he enjoys and is fortunate for.

“Just to let high school kids, who will never get this chance back, to get out on the floor and be able to play that game and have those memories… It’s big and I’m proud of the girls,” he said.

Although unable to pinpoint exact moments in the game, Wilson said he felt like his team played well each quarter, stringing together small victories each possession that continued to add up.

Execution was one improvement the coach was eager to make with his team, especially in half-court play. Wilson said during Monday night’s game, the Lady Hounds found themselves in some tight situations, where they either battled back or turned the ball over.

The Harlan County Lady Bears will travel to Hazard on Thursday in another head-to-head match. Corbin will host McCreary Central Thursday as well.

The Alternative Baseball Organization, a 501c3 authentic baseball experience for teens 15 and up and adults with autism and other... read more