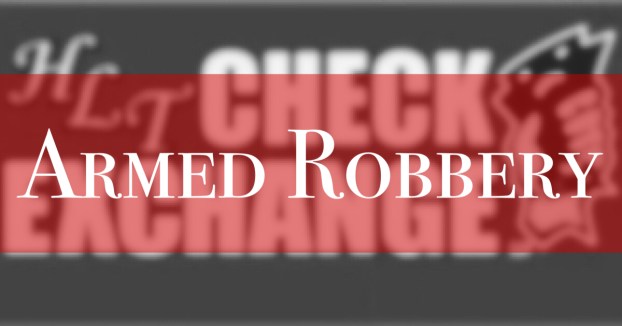 An employee at HLT Check Exchange was bound at gunpoint during an armed robbery Tuesday afternoon. The search for the suspect, who disappeared afterwards, is still underway as Harlan Countians keep a sharp eye out for someone bragging about their recent loot.

Shelia Smith, the customer service representative who was on duty, said in a Facebook post shortly after the incident occured that the man tied her hands behind her back, taking an unknown amount of cash.

Unable to see how the culprit made his exit, Smith turned to her peers on the social media giant to warn locals about her experience and to get others to be on the lookout for the male she described as being 5-foot, 10-inches tall wearing a gray hoodie, blue bandana and sunglasses.

“Watch yourself because if it can happen to me, it can happen to anyone. I hope the guy is caught and prosecuted to the fullest,” Smith said in her post. “If you hear anyone bragging on this, please contact the police or me.”

Anyone with knowledge of the suspects potential whereabouts or other information is asked to call the Harlan Police Department at 606-573-1132.

The case remains under investigation by HPD Officer Mitch Alford.

The Survivor in Me: Evarts local fought breast cancer twice and won, says God gave her power to battle on

(Note: This is part two of a four-part series. For part three of The Survivor in Me, don’t miss next... read more