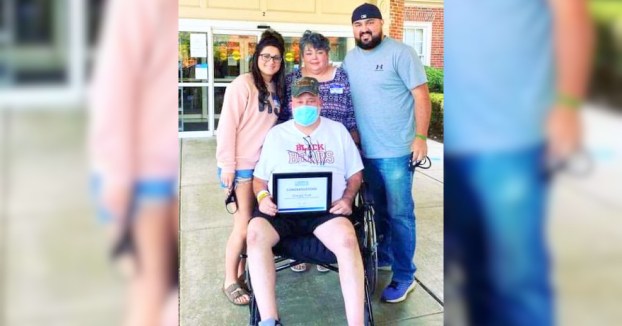 Returning to Harlan 75 days after his battle first began with COVID-19, Gregg York is recovering in the comfort of his own home, with family cheering him to the finish line. (Photo by Christina Spurlock)

Local returns to Harlan after 75-day battle with COVID-19

After 75 days in the hospital fighting COVID-19, Harlan native Gregg York is happily home and recovering.

Judge-Executive Dan Mosley said it was “a joy” to see a photo of York and his family as he was discharged Friday.

“He’s been through a lot with COVID-19, but he is a blessed man to be coming home,” Mosley said. “I know they all have appreciated the prayers and love from all, and we should continue to pray for a complete recovery for Gregg as he transitions home.”

York went to Baptist Health in Corbin on July 27, where within two day’s time he was on a ventilator and declining.

As his condition worsened, doctors in multiple hospitals did not think he would pull through.

After being flown to the University of Kentucky Medical Center on Aug. 4, York began improving but was still very sick as the virus attacked his nervous system.

He later began rehab at Cardinal Hill on Sept. 17 before returning home Friday, where he will continue taking steroids and antibiotics for approximately six months.

Harlan County recorded 34 new cases of the potentially deadly virus last week, down 57 from the previous, a decline Mosley said he hopes the county will continue to see.

On Monday, five additional positives were reported, bringing the overall total to 533, with 45 active cases and three individuals who are hospitalized.

There have been 13 deaths associated with the virus.

“The state’s metric for determining a county’s incidence rate has changed a lot for us over the last week or two because it measures average cases over the last seven days,” Mosley said on Monday. “We remain in the orange category at 17.6. It’s important that our case incidence rate stays in the orange category, or even improve to the yellow or green category so that our kids can receive in-person instruction and enjoy other opportunities they love.”

Mosley said 29.8 percent of the county’s population have been tested since the pandemic began.

“Our positivity rate in Harlan County has stabilized over the last week to 6.8 percent overall,” he said. “Since last Monday, we are in line with our overall average with 6.8 percent of the tests that have been done in Harlan County over the last week being positive, which is down from 10.7 percent last week and just over 15 percent the Monday before last. It’s great to see this steady decline since our spike two weeks ago.”

This does not include tests that were negative on residents of Harlan County who were tested out of county and out of state.

Mosley also announced the CDC has rolled back changes made last month and recommends everyone who has been in contact with an infected person be tested.

“Due to our decline in cases over the last week, I will shift back to providing a weekly update between 6 p.m. and 7 p.m. on Monday evenings concerning COVID-19 moving forward,” he said. “Should we have an additional spike in cases or there is other relevant information regarding our incidence rate or community spread that needs communicated, I will share that information with you as soon as I am able. You can refer to the Harlan County Health Department page for the daily case numbers.”

Schools under the Harlan County School District umbrella will resume in-person classes Monday after a week off because of COVID-19.... read more