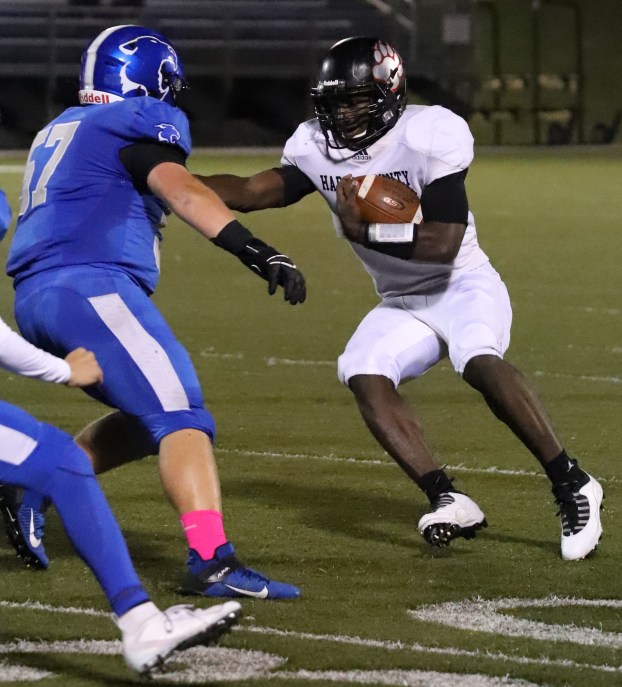 Harlan County running back Demarco Hopkins battled for yardage in Friday’s game at Letcher Central. The Cougars pulled away in the fourth quarter for a 24-7 victory. (Photo by Kim Henson)

After six years, the Coal Bowl trophy has returned to Letcher County.

Harlan County held a 7-0 advantage at halftime on Friday against homestanding Letcher Central, but the Cougars scored 24 points in the second half to win 24-7 in district action.

Letcher Central evened the series record to 4-4 at home. Harlan County has never lost to the Cougars at HC in six games.

The Black Bears opened the scoring in the first quarter as senior running back DeMarco Hopkins scored on a 26-yard touchdown run at the 3:38 mark. Jordan Steele kicked the extra point.

HC’s Josh Swanner scored on a two-point conversion, but the Bears were whistled for a penalty and settled on Steele’s kick.

Letcher County had two possessions in the opening quarter but failed to find the end zone.

The Cougars appeared to score in the second quarter, but a penalty erased the touchdown and allowed Harlan County to lead at halftime.

Letcher Central did score in the third quarter as junior quarterback Carson Adams went in from the 1-yard line. The Black Bear defense stopped the two-point conversion try as HC led 7-6.

The Cougars went ahead for good early in the fourth period as Adams scored on a six-yard run.

Letcher Central made it 18-7 as Adams connected with senior receiver Jonah Little for a 25-yard touchdown pass with less than four minutes remaining in the game.

The Cougar defense came up with an interception, and one play later, Hayden Brashear, a junior running back, scored from the 1. The conversion failed to close the scoring.

The game was not finished as both teams battled to a brawl, forcing the officials to stop the game.

A version of “You’ll Never Leave Harlan Alive” was played over LCC’s public address system and it didn’t settle with the visiting team. It’s a song the Black Bears have played since the school opened in 2008.

Seniors Hunter Blevins, Josh Turner and Brett Roark led the Harlan County defense on the night. Roark and Turner each had block punts.

Hopkins paced the team with 77 yards on 21 carries. Turner followed with 29 yards on eight rushes.

Cody Clayborn completed five of 13 passes for the Bears with 78 yards. Tyler Flanary caught a pair of passes for 59 yards. Swanner had three receptions for 19 yards.

Both teams were penalized nine times and more than 100 yards each for the game.

The Cougars have outscored their opponents 131-37 in the first four games.

Letcher Central (4-0 overall, 2-0 district) is scheduled to play host to Clay County (2-2, 0-2) on Friday. Following an open date, the Cougars will travel to Johnson Central on Oct. 23.

Harlan County (2-2, 1-1) returns home to face Hazard in a non-district clash this week. The Black Bears will play host to Johnson Central the following week.