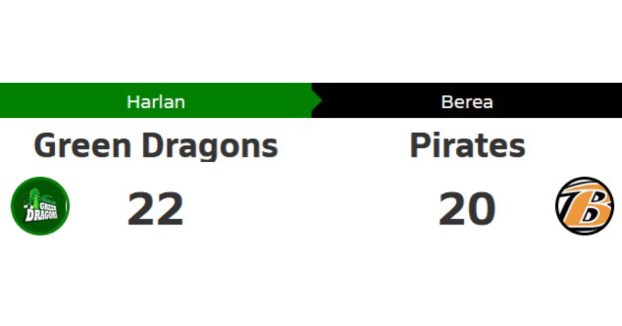 Green Dragons takes the ‘W’ after battle with Pirates

BEREA — The Pirates were in an almost perfect position to wrap up a hard-earned victory Friday at home.

Harlan’s fourth turnover of the game — an interception — gave Berea (0-3) the ball in the red zone with the final minutes rapidly running off the clock and a six-point advantage on the scoreboard.

An unlikely series of events followed that led to a heartbreaking loss.

The Pirates couldn’t convert on a fourth down and just moments later the Green Dragons found the end zone and were successful on a two-point conversion.

Harlan (2-1) then recovered a fumble on the ensuing kickoff, which sealed a 22-20 win at Duerson Stadium.

Berea had a 13-6 lead at halftime and didn’t trail until the final minutes.

The game featured eight turnovers and a seemingly endless string of penalties on both teams.

Cunningham got Berea on the board with a 40-yard touchdown run two minutes into the second quarter.

Harlan senior quarterback Connor Scearse left the game with an injury, but the Green Dragons took advantage of a Berea fumble moments later. Ethan Clem scored on a 10-yard run.

Just before the half, Smith caught a 29-yard TD pass from Jayson Coburn.

A touchdown catch by Evan Browning and two-point conversion helped Harlan tie the game, 14-14, with 4:47 left in the third quarter.

Berea jumped back in front, 20-14, on a 17-yard touchdown by Cunningham less than two minutes later.

The Pirates failed on fourth down on each of their final two possessions, giving the Green Dragons a chance to battle back.

Shane Lindsey caught a pass over the middle and got to just short of the goalline before being dragged down. Darius Akal caught a touchdown pass with 1:14 left to tie the game. A two-point conversion run by Clem put Harlan in front for the first time.

Harlan (2-1) is scheduled to play host to Knott Central (1-0) on Friday. Berea (0-3) is set to return to action on Oct. 9 at district rival Kentucky Country Day.

By John Henson Contributing writer It was just like old times for three members of the Alice Lloyd cross country... read more