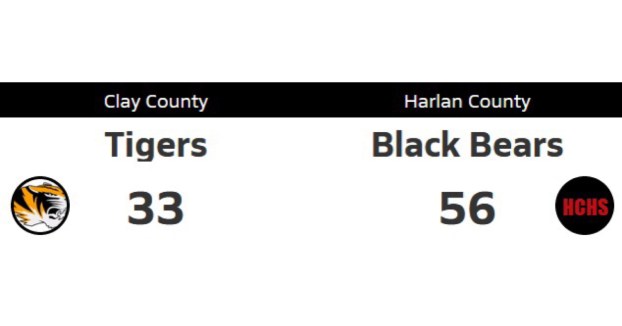 After a 42-0 loss last week at home against Wayne County, Harlan County coach Eddie Creech was determined to rediscover the physical style that has defined the program over its first 12 years.

The changes worked as Harlan County started a running clock in the third quarter, building a 42-point lead on the way to a 56-33 win over visiting Clay County.

“We wanted to see a different energy this week. That was our goal, get back to playing Harlan County football. I feel having such physical practices this past week helped,” Creech said. “I was impressed with the way our kids responded to adversity. Now, we must build on that momentum and knock some more heads again this week in practice.”

The Bears found success with a spread offense that led to production on the ground and through the air.

Harlan County opened the scoring on a 14-play, 55-yard drive as Hopkins went in from the one with 7:38 left in the opening quarter.

The Black Bears came back three minutes later as Hopkins scored on a 20-yard run. Clayborn found Tyler Flanary for the two-point conversion as HC led 14-0.

The Tigers got on the board at the 2:34 mark of the first quarter as Rice connected with Connor Farmer for a 24-yard TD pass.

On Harlan County’s next play, Hopkins raced 57 yards for the score. Josh Turner added the two-point conversion as the lead grew to 22-6.

An eight-play, 71-yard drive was capped by a Rice-to-Farmer touchdown for 33 yards, but the Tigers trailed 22-12 after one period.

The Black Bears used a 21-0 second-quarter outburst to put the game out of reach.

Clayborn found Swanner for a 42-yard TD with 7:03 remaining in the first half. Jordan Steele added the extra point.

Harlan County closed the half as Rice was intercepted by Turner. The senior linebacker raced 85 yards for the score. His two-point conversion made it 43-12 at halftime.

Rice threw his second interception on the first play of the second half as the Bears took over on the Clay 48-yard line.

With a running clock the rest of the game, Flanary took a punt return for 57 yards to the Clay 9. On the next play, Swanner scored his third touchdown on a pass from Clayborn. Steele’s kick made it 56-12.

The Tigers added three touchdown passes beginning with a 65-yarder from Rice to Raven Abner. A 65-yard pass to Brady Wolfe and a two-point conversion from Rice to Ben Meadows made it 56-26. Clay’s final score came with two seconds left as Farmer had a 2-yard reception. Farmer added the extra point.

The 56 points scored was the most by the Bears since a 56-28 win over Letcher Central last season.

Green Dragons takes the ‘W’ after battle with Pirates

BEREA — The Pirates were in an almost perfect position to wrap up a hard-earned victory Friday at home. Harlan’s... read more