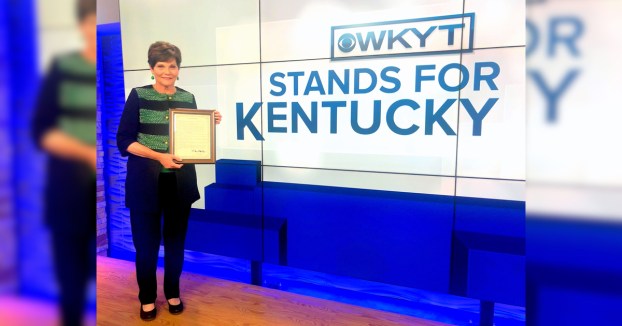 After 41 years of news at WKYT, Barbara Bailey’s peers wished her luck as she reported one more time on Friday before her retirement. Bailey posed beside the WKYT logo on her walk down memory lane, holding onto a framed proclamation from Harlan County Judge-Executive Dan Mosley that made Sept. 25 known as the official Barbara Bailey Day. (Photos by Emily Sargent)

Barbara Bailey retires after 41 years of news anchoring at WKYT

Harlan native Barbara Bailey signed off for the last time at WKYT on Friday after a 41-year career in broadcasting.

Bailey, Kentucky’s longest-serving television news anchor, grew from being a hometown reporter at the Harlan Enterprise to one of the most beloved anchors across the commonwealth.

To celebrate her service, the University of Kentucky has voted to induct her into the Kentucky Journalism Hall of Fame this year. She was also honored by the Kentucky Broadcasters Association, which presented its Mic Hall of Fame Award to her in 2019.

“Barbara will always have a special place in my heart, with the Harlan County connection and being a great broadcaster that I’ve watched my entire career. There is no replacing Barbara,” said Jeff Anderson, WKYT vice president and general manager.

Having always loved reading and writing, Bailey said she kept her nose in a book throughout her school life, noting she was often shy and timid.

“I tried out for the speech team and didn’t make it because I was just so nervous,” she said. “But I did take a lot of music classes. So when it came time to decide what to do when I went to UK, I was a music major.”

But once there, Bailey said she “got her bearings,” asking herself what she was really going to do with her life. Coming back to her original interest in books and writing and listening to the Watergate hearings nearly everywhere she went, Bailey said it suddenly clicked.

“I think what really sealed the deal for me was working at the Harlan Daily Enterprise,” she said. “I was so excited when I got my job there, and Ewell Balltrip was a fabulous, fabulous teacher. He was just so wonderful.”

Bailey reminisced about the first time she entered the Enterprise office, with Balltrip asking her what she wanted to do with her life.

Unsure of the path she wanted to take, Bailey told him she thought she wanted to be a reporter or maybe go into public relations.

“At the time I was taking some PR classes and he said, ‘What?!’ I think he made it his mission to make sure that I said, with authority, ‘I am going to be a reporter!’ It was such a blessing to work there,” she said.

Bailey got her start in the newspaper business in the late 1970s when she came to the Enterprise in hopes of having a summer job away from the hustle and bustle of college life.

“I was hooked as soon as I had that newspaper in my hands and saw that byline. You just don’t have that in TV,” Bailey said. “You don’t get copies of what you do on TV like that. I can’t sit back and see what we did. It’s more fleeting. I just think there’s something so special about newspapers.”

Bailey said knowing what path to take in life comes for everyone at different times, being quick to add there is nothing wrong with that because “you want to know it’s the right path.”

She said her love of reading was a special memory she has of her grandmother.

“She lived on Mound Street, right on the corner across from where you could see the school,” she said. “I would spend the night with her a lot on weekends and that’s what we would do on Saturday morning. We would walk downtown to the public library and trade in our books and come back. She really got me into that love of reading.”

Having started as a newsroom assistant at WKYT before anchoring her first newscast in 1980, moving up to co-anchor alongside John Lindgren (1984) and eventually Bill Bryant and Sam Dick (late 1980s), Bailey said she found her job as a news anchor to be very important and made it her job to get people the truth through her role as a reporter.

“People can get their information so many ways and so quickly, but they still need to have that element of trust,” she said. “If they can pick it up on the phone and say, ‘I just saw a Tweet that said this happened,’ do they know if it was from a legitimate news source? There’s still a lot to be said for a newspaper with a good reputation or a TV station that values the true meaning of journalism.”

Bailey said although retirement is a new and exciting chapter in her life, she was emotional driving through the gates at WKYT for the last time as a news anchor.

“You don’t do something for 41 years and not have an overwhelming feeling, but it’s time,” she said. “I want to spend time with my grandbabies.”

Bailey said after years of her family being patient with her and the demands that came with her job, she is looking forward to a “quieter pace” to enjoy the rest of her life with family and friends.

Bailey is married to Roger Cowden. They have two children, Courtney Cowden Woomer and Clark Cowden, and granddaughters Callie and Caroline Woomer.

‘We all loved her’ – Harlan County mourns loss of Dr. Carolyn Sundy, SKCTC Vice President of Diversity and Inclusion

Locals across the community are mourning the loss of Dr. Carolyn Sundy, who was vice president of diversity and inclusion... read more