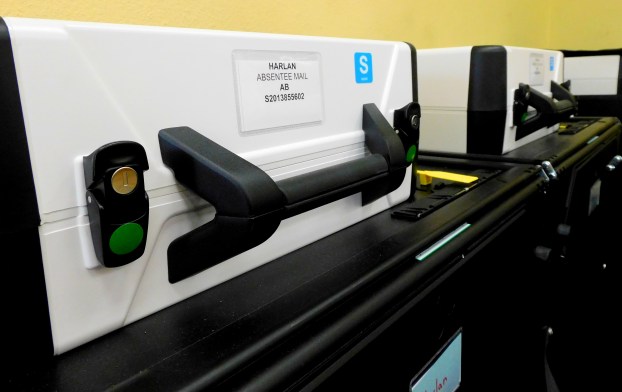 As voter registration deadlines near, new machines for paper ballots are setting inside the Harlan County Courthouse to gather an accurate count for local voters. (Photo by Emily Sargent)

As the November general election nears, the time to request an absentee ballot is coming to a close.

Harlan County Clerk Donna Hoskins explained the deadline for those wishing to vote by absentee ballot in the November general election is Oct. 9 at 4 p.m.

Voters can apply online at govoteky.com or request an absentee mail-in ballot at the Harlan County Clerk’s Office, Hoskins said.

The ballots can be postmarked no later than Nov. 3 and received by Nov. 6 or dropped off at the Harlan County Courthouse to be mailed.

Hoskins said there are certain qualifications a person must meet to apply for the ballot, but those with disabilities, illness or those enrolled in school are generally accepted.

Kentuckians concerned with contracting or spreading COVID-19 can also request a ballot by mail.

According to the Kentucky State Board of Elections website, the qualifications for a mail-in ballot include those who are:

Hoskins said locals will also have the chance to vote early beginning Oct. 13 until Nov. 2 at the Harlan County Courthouse using paper ballots only. Early voting will occur from 8:30 a.m. until 12:30 p.m., when the building closes for necessary sanitation, opening back up from 1 p.m. to 4:30 p.m.

“We will also be open the last three Saturdays in October for early voting,” she said. “We’ll be here from 8 a.m. to 12 p.m. on those days.”

Hoskins emphasized that all voting will be done using paper ballots, allotting roughly three weeks for voters to enter their final submissions.

“If they void a ballot, by law, they can have up to three,” she said. “So, if it won’t scan, they can request another from the election officer and the voided ballot will be properly discarded.”

Hoskins said voters must also present some form of ID, such as a photo ID or driver’s license.

Although other voting locations have not been set in stone, Hoskins said all early voting will be conducted at the Harlan County Courthouse, where she hopes as many locals will come to vote as possible.

“We want Harlan County to have the biggest voice possible during the election,” Hoskins said. “We want to be heard statewide.”

For more information on absentee ballots or early voting, call the Harlan County Clerk’s Office at 606-573-3636.

From Harlan ARH According to the American Cancer Society, prostate cancer is the second leading cause of cancer death in... read more