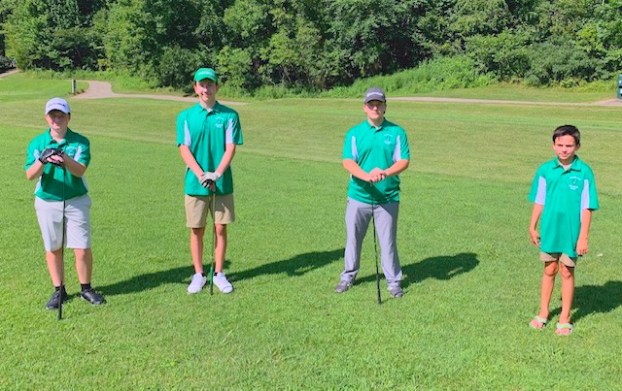 Lee wants golfers to focus on more than wins

With golf being not as impacted as other sports, like football or basketball, Harlan High School coach Jeremy Lee said he wants to take this time during a worldwide pandemic to team his team to focus on more than just wins.

Lee said although there will be plenty of precautions taken, golf is not a contact sport, so the risk of transmission will not be as high.

“The only real difference is the flag stick, which is usually removed when the player is putting, will remain in the hole. This will prevent multiple hands from touching the same item,” he said. “Also, when players are on the Tee Box, they must maintain six feet of separation. Anytime they are gathered in a group, masks must be worn. But, when they are in play, as long as they maintain social distance, they don’t have to wear their masks.”

Lee said above all else, he wants his team to improve after every practice and every match.

“I’m not demanding wins, just progress forward. I want them to establish long term and short term goals and learn how to work towards achieving those goals. Wins will come,” he said.

Lee said he wants to see good attitudes, good sportsmanship, players learning how to deal with and overcome adversity and becoming mentally stronger all while having fun ahead of any wins.

“If you improve in all of those areas, you will start to see lower scores and competing for wins.”

Lee said in everything his players do, he wants to see them give their best effort without “short changing anything, especially in their education.”

“There will come a time in their lives when they can no longer play sports but they will rely on their education for the rest of their lives. Putting their best effort into their studies now will benefit them from now on,” he said.

While promoting positive energy even when times are tough, the coach said he is consciously trying to build his players up when he notices them struggling.

“There is nobody harder on these players than they are on themselves. A negative attitude in a negative situation will only bring negative results,” he said. “They have to know I believe in them or they will beat themselves up too much.

“I always try to incorporate life lessons when I can. Life is hard and unfair. But you have to deal with it. You do that by being disciplined, working hard, being honest, having a good attitude and not giving up. You can apply all of those lessons to golf and life.”

Lee said his two seniors players, Carson Murray and Story Miller, are gifted sportsmen with the will to power through.

Murray came into the season with a “good swing and good knowledge of the game,” according to Lee, and proves to be one of his top performers. Although Miller has just began playing golf, Lee said he has also made great progress, with a natural swing and eye for the ball.

“Like Story, Chris Taylor is new to golf and has improved leaps and bounds since this summer. His swing is more controlled and he is hitting good shots more consistently,” he said. “Chris’ best attribute is he is coachable. Everything I have told him to do he has done. And he’s not afraid to ask questions, which is a great quality.”

“Aiden is a very advanced player to be a Freshman. He has a beautiful swing and has consistent accuracy. Aiden has good club knowledge and is a smart player. He has a bright future in golf,” he said. “Kevin has made great strides between last year and this year. He has solid iron work and his putting and drives continue to improve. I expect by next year Kevin will be a consistent varsity player.”

Lee will continue to teach his players that there is more to life about wins at the Bell County Invitational on Sept. 20.

By John Henson Contributing writer Harlan County finished second in both the boys and girls divisions in the opening cross... read more