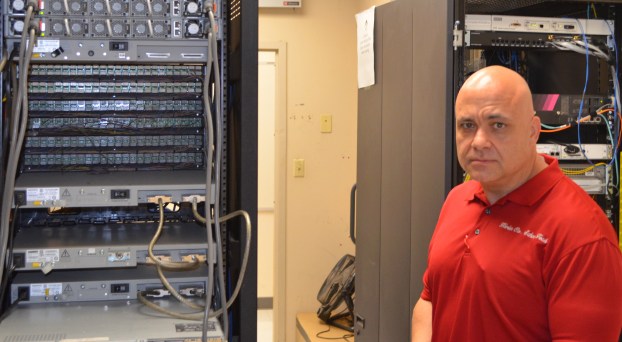 From the Harlan County School District

Brent Chitwood, a 20-year veteran of the Harlan County Public Schools Technology Department, has been named the district’s director of technology/chief information officer.

The appointment became effective Sept. 1 upon the retirement of David Burkhart. Burkhart had led the district’s technology program for 22 years.

“Mr. Chitwood has assumed the role of technology director/CIO at the most challenging time in the history of education,” Superintendent Brent Roark said.  “He has been faced with challenges we have never experienced in past years.”

Roark referenced the district’s shift to online learning because of the COVID-19 pandemic. This created urgent needs to provide students with devices and to service them with innovative internet options.

“Mr. Chitwood and his staff have risen to meet the challenges presented to them. I have supreme confidence in his abilities to lead our district in all aspects of technology,” Roark said.

Chitwood began with the district in 2000 as a LAN technician. He later became the voice/data communications specialist. In 2008, he took on the added responsibilities of the district network administrator.

He holds multiple certifications and participates in annual trainings and updates.

Chitwood was complimentary of the technology program put in place by Burkhart.

“I’m happy with the direction we have gone,” he said. “I helped craft it over the years with Mr. Burkhart. I think he did a great job. He gave us a good base to start with and to continue building upon.”

Chitwood said the district is faced with a need to make significant changes and updates “over the next couple of years as technology continues to evolve and becomes more and more crucial.”

He said the district’s technology staff has worked tirelessly to prepare for the virtual learning now taking place. He said it requires diligence as the district strives to serve all students.

“We have a good number of students who did not have personal devices at home,” he said. “We continue to work to secure additional devices with the goal of each child having their own. We have worked in the community to identify sites for students to access Wi-Fi and have deployed school buses to rural areas to offer internet access to those without it.”

The director’s job has many facets, including serving as the Infinite Campus administrator, overseeing the federal E-Rate program, which provides critical funding for school technology programs, and numerous others that include the day-to-day operations of the technology department.

“We are responsible for technology in eight elementary schools, the high school, maintenance and transportation departments, and the central administrative offices,” Chitwood said.

He currently has five staff members on the technology team. He will also work closely with school technology coordinators who assist with tasks at their respective schools.

One of his immediate goals is to work to update the district’s technology infrastructure.

“I want to update our aging wireless infrastructure so that we have a true one-to-one student ratio,” he said. “This has been our goal, but it requires a lot of money to be successful.  Another update I hope to see is phone systems in the schools which are rapidly becoming obsolete.”

He is married to Stephanie Chitwood, a district school psychologist.