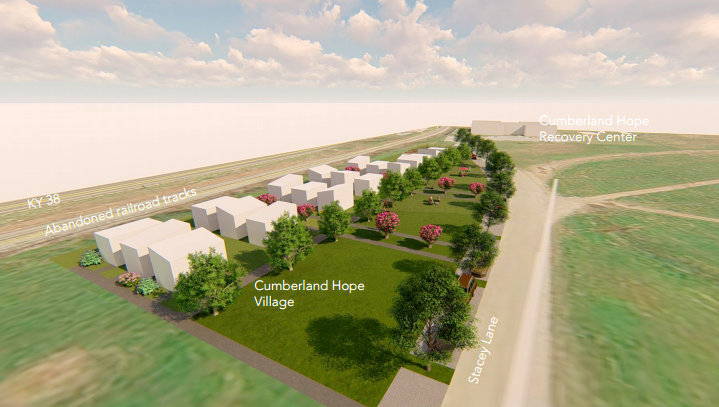 Work to complete the Cumberland Hope Village is underway near Verda to combat homelessness and help recovering addicts and struggling students reach their goals. (Photo by CEDIK)

Though the coronavirus pandemic has slowed the project to a crawl, constructionists are diligently working toward the completion of the Cumberland Hope Village.

Judge-Executive Dan Mosley described the site as a “village of hope” for those facing homelessness, whether they are a recovering drug addict or struggling student.

During the county’s 2019 Drug Summit, Mosley said there were doubts about the project that is “very near and dear” to his heart.

“Youth homelessness will be addressed. Kids that are homeless will have the opportunity to live there if they’re above the age of 18 and people who are coming out of treatment programs,” Mosley said, being sure to mention the process will be highly monitored.

While attending a graduation ceremony at the Cumberland Hope Recovery Center, Mosley said one of the graduates told him she did not know how she would hang her certificate to a beam beneath a bridge. The person said she would rather live under a bridge because it was a healthier environment for her than the place she lived before.

He said there will be a list of requirements the tenants will need to meet to live in the subdivision for a six-month period, including finding and keeping a job, enrolling in a career training program and more.

Mosley said the homes will be used for a transitional housing program for people who will be screened by a panel to determine who will live in them.

Today, site-work is underway to raise the property three feet out of the flood plain and ease the transition from a vacant, grassy lot to a social village of tiny homes to combat homelessness.

In a conceptual site master plan prepared by the Community and Economic Initiative of Kentucky and Department of Landscape Architecture at the University of Kentucky, existing site conditions located on Stacey Lane make for near-perfect conditions for the village.

All necessary utilities are located under the road leading to the recovery center (Stacey Lane), including water and sewer. Electricity to the homes are anticipated to be on a group meter, much like a campground, to simplify billing. WiFi access is also being discussed as being clustered between the homes to lower overall costs.

The courtyard design created by CEDIK in partnership with local leaders facilitates easy phasing for construction of six to eight tiny home clusters as future funds become available. Spread out over 10 acres of property, the number of homes could potentially reach 100 or more and include future projects, such as a larger community center and pavilion to host events and social gatherings.

Of the potential first 12 tiny homes, three were built by students and one with the help of Christ’s Hands. Five additional tiny homes are in various stages of construction and were delivered to The Building Institute of Central Kentucky for the installation of the mechanical systems, like HVAC, plumbing and electrical systems.

Bruce Maybriar, director of the school, said he is excited for his students to learn the importance of helping others, as well as gaining additional practical experience. The Institute has committed to having the tiny homes completed by November.

Kentucky Awakening Mosaic, a solution-based group led by evangelist Rick Curry, also announced their partnership with Harlan County and the Institute in helping to build the homes.

The village will consist of a number of other features in addition to the tiny homes and future splash pad near its entrance. CEDIK’s plan includes courtyards between front entrances of the tiny homes, backyard areas for each, landscape to separate the homes and railroad tracks, a central axis to connect all the homes to each other and the recovery center, parking areas along Stacey Lane, central greenspaces for recreation and socializing, a community garden for residents to grow some of their own food and more.

Mosley said the estimated completion date for the project fell somewhere in the fall of this year, but with the COVID-19 pandemic, dates for the village’s opening have been postponed alongside many other projects throughout the county and region.