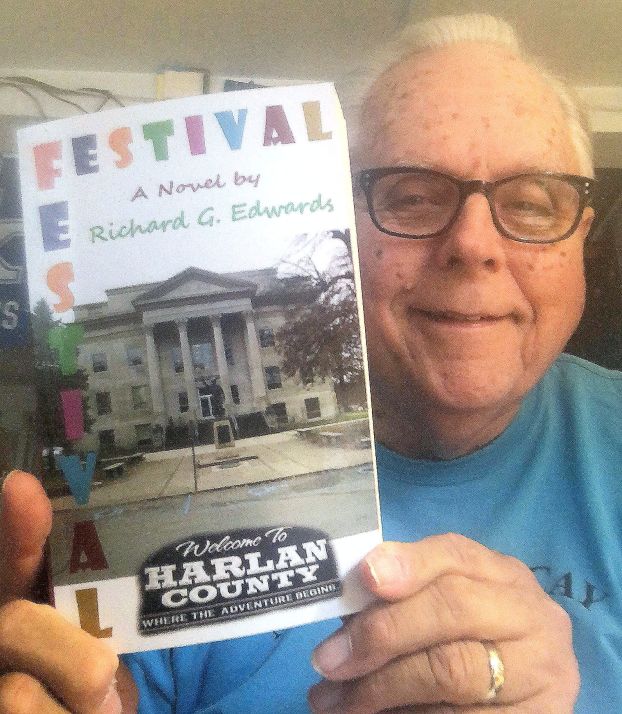 Harlan native Richard “Dick” Edwards takes a selfie with his ninth book titled “Festival,” which will be available for signing at Jewelcraft on Aug. 27. (Photo submitted)

Harlan native and local author Dr. Richard G. “Dick” Edwards will be set up in Jewelcraft at the Village Center Mall on Aug. 27 for a signing of his book titled “Festival,” and his books featuring the same characters. Edwards will be available from 11 a.m. to 1 p.m. to sell and sign the book.

Edwards said he has enjoyed writing the Harlan-based novels, with “Festival” being his ninth book.

He said he cannot wait to “see and chat with his readers and friends” during the signing.

“I’m so proud of my mountain heritage, and I’ve tried to reflect that in all my books,” said Edwards, a 1958 graduate of Harlan High School.

Edwards said “Festival” will leave its readers with a smile and warm, fuzzy feeling in their hearts.

“There are lots of mountain stories and humor included in this fast-paced mystery,” he said. “I also included a bit of romance in this last book with these characters.”

Edwards said he was fond of the feedback he has received from his readers, including comments that read “I enjoyed your work very much,” “I have all your books,” “What a thriller!” and more.

In “Festival,” Harlan Mayor Fred Knapp plans a super festival to celebrate the mysterious, powerful, historic artifacts that are placed on public display each year.

The CIA uncovers information on his plans and sends agents to assist the sheriff.  But the best help comes from Preacher Puss, the sheriff’s amazing feline mascot that has gained a wide reputation for subduing crooks, and has even been made an honorary deputy sheriff.

The CIA Director visits Dr. Randy Peters at his Center for Appalachian Research in Lexington and the two cook up a secret scheme to hopefully prevent the theft of the priceless artifacts.

ReWork EKY program helping people get back to work

From EKCEP Eastern Kentuckians and their spouses affected by layoffs due to the current COVID-19 pandemic are now eligible to... read more