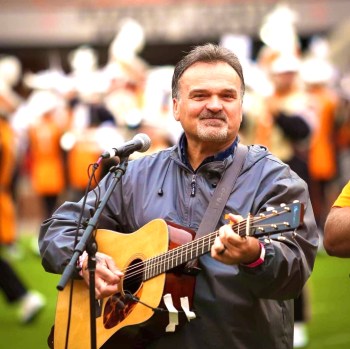 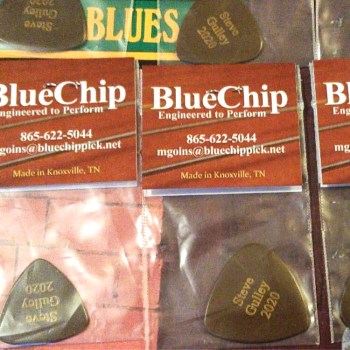 In an auction organized to benefit Steve Gulley, a local bluegrass musician, 10 handmade BlueChip picks will be up for grabs doting the markings “Steve Gulley 2020,” the only ones of their kind. (Photo courtesy of Joseph Hensley)

An event benefiting longtime bluegrass musician Steve Gulley, who recently fell ill with cancer, will take place this Saturday at Katie’s Carry Out and Catering at 6:30 p.m. Organized by Joseph Hensley and friends, the event will feature music in Gulley’s honor and an auction to raise money for Gulley and his wife, which includes the only 10 handmade BlueChip guitar picks engraved with “Steve Gulley 2020.”

Joseph Hensley, a vocalist and guitarist from Claiborne County, said he wanted to do something for the “couple who is very dear to me.”

“I have attended Steve’s acoustic music camp for five years and Steve and his family have become like family to us,” Hensley said.

He added some of the musicians who have attended Gulley’s music camp will also be performing at the benefit, including Faith Willin, The Roberts Sisters and Second Chance.

An auction will also be held during the event, with all proceeds going to benefit Gulley and his road to recovery. As part of the donations, Hensley said he wanted to include a BlueChip, a particular guitar pick Gulley likes to use.

“When I called the BlueChip family, I told them what I was wanting to do. They asked us to hold on the line for a few minutes, and when he returned to the phone, he told me they wanted to donate 10 BlueChip picks that say ‘Steve Gulley 2020’,” he said.

Hensley said the special, handmade picks will not be reissued again, as stated by the company.

Other auction items include a variety of cakes and candy. Hensley said donations for the auction can be dropped off at Katie’s or people can send a message to him on Facebook.

A number of  T-shirts designed by Kenny Smith are available to pre-order, which will support Gulley’s journey. Because Gulley is a Vols fan, the shirts are Tennessee orange and part of the “Patching It Up” fundraiser.

Donations are also taking place through GoFundMe, a fundraising website that has already helped Gulley’s friends and family raise more than $27,000 to go toward his treatments and recovery.

Phillip Leadbetter, a fellow bluegrass musician and resonator guitarist, created the GoFundMe page to help Gulley and his family, who he said was “always the first in line to help anyone who needed it.”

“Steve is well-liked and well-known by everyone in the bluegrass community as being one of the very best male vocalists in the business,” Leadbetter said on the GoFundMe page. “When other musicians fell on hard times, Steve was always one of the first to help out, many times driving all night to donate his time and fuel.”

Leadbetter said the situation was flipped when it appeared Gulley was diagnosed with abdominal cancer, and now it’s the community’s turn to help Gulley and his wife.

“Steve is starting into the cancer program here in Knoxville at the University of Tennessee Cancer Center.  We are not sure what lays ahead, but one thing we are sure of is that the bills do not stop coming,” he said. “Steve and Debbie both need your help at this time. God knows that Steve has done and gave so much to so many who needed him. It’s time we help them during this difficult time.

“I know if the shoe was on the other foot, Steve would be right there to help you. He is just that kinda guy. God bless each and every one of you for helping and for keeping them in your prayers!”

Gulley released the following statement on his page after receiving the news of his condition, which sprung Hensley, Leadbetter and others into action, making sure the musician received the support he needed during his battle with cancer:

“As I’m writing this, I’m still in shock and trying to come to grips with everything that has transpired over the last three days.

“After experiencing some stomach issues for some time, they really became unbearable over the last week. I hadn’t been able to keep anything on my stomach or eat for over a week. I went to my primary care doctor and went through a battery of tests, and after having a CT scan on Thursday, was immediately called back in to review.

“I was then informed that I have a large mass on my pancreas, which has metastasized into part of my liver and one lung. Still hard to wrap my head around that. A lot of tears and soul searching in the last couple of days for me and my family.

“I’m currently in University of Tennessee Medical Center and receiving the best care possible. We will know more after meeting with the oncologist and setting a plan of action in motion. I will fight as hard as I possibly can to beat this and humbly ask for your prayers and love.

“Above all, as always, I will place my foot on the solid rock and my faith in my Lord and Savior, Jesus Christ. He is the master physician and all things are possible through him. Please pray for us during this time and know that we love you.”

Gulley is the lead vocalist/guitarist for Steve Gulley & New Pinnacle.

Before founding and stepping into the lead role of his current band, Gulley was also featured in the Renfro Valley Barn Dance and became its musical director. He then began a career touring with Doyle Lawson & Quicksilver, founded Mountain Heart and Grasstowne and eventually the Dale Ann Bradley Band.

To make a donation to support Gulley’s fight against cancer, search “Helping our music friend Steve Gulley” on GoFundMe or message the Joseph Hensley Music Facebook page for more information.