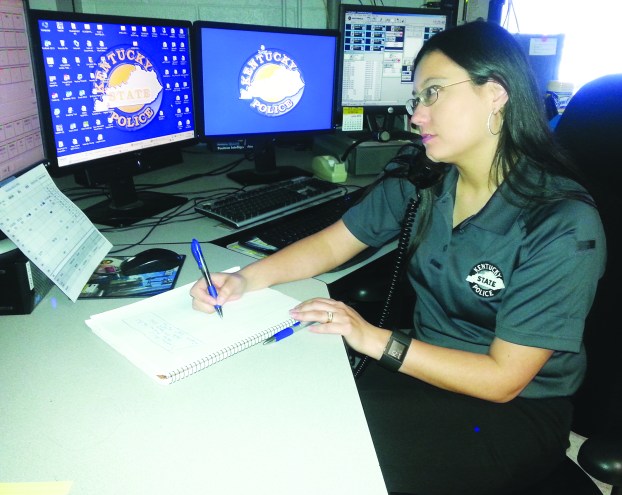 Yolanda Young, a dispatcher at KSP Post 10, has been serving others for 17 years. Telecommunicators like Young are being honored this week across the nation. (Photo courtesy of Debbie Caldwell)

Silent heroes behind the headset

These silent heroes behind the headsets are more than just a voice on the other end of the line. They often save lives on a daily basis.

“KSP telecommunicators are challenged on a daily basis dealing with stressful situations, many that involve life and death, and they are expected to handle these situations with compassion, empathy and professionalism,” says Captain Catron, Commander of KSP Post 10 in Harlan. “They are a life line to our troopers in the field.”  By the nature of the business, they deal with people who have been victimized or need medical assistance. They may be threatening and belligerent, or in some cases, not able to communicate at all, other than dialing 911 with their last bit of strength, in an attempt to get help.”

KSP telecommunicators handle dispatch duties for Kentucky State Troopers, Commercial Vehicle Enforcement Officers, Kentucky Dept. of Fish and Wildlife Conservation Officers and other emergency service agencies. Their duties include calling wrecker services, notifying channels of administration, running license plate and driver’s license numbers, running criminal histories and notifying family members while continuing to answer new calls and handling other radio traffic. Most important, they are that calming voice on the other line when someone calls 911 and is most likely having the worst day of their life.

KSP employs 180 telecommunicators at 16 posts throughout the state. In 2019, they answered 2.1 million calls resulting in 500,236 requests for assistance. Post 10 employs 12 telecommunicators who handle calls from Harlan, Bell, and Knox county area. Last year, they responded to 21,772 calls.

During National Telecommunicator’s Appreciation Week, KSP plans to highlight the great work of all dispatchers across the state by highlighting stories of their great work and sharing photos and videos about their efforts on the KSP Facebook, Instagram and Twitter platforms.

For more information or to apply for a telecommunication position with KSP, log on to the state personnel website at www.personnel.ky.gov The Kentucky State Police (KSP) is a law enforcement agency that prides itself on attracting the best individuals. KSP affords equal employment opportunity to all individuals, regardless of race, creed, color, religion, gender or age.

Individuals living in southern and eastern Kentucky will begin to receive some of the first Economic Impact Payments this week.... read more