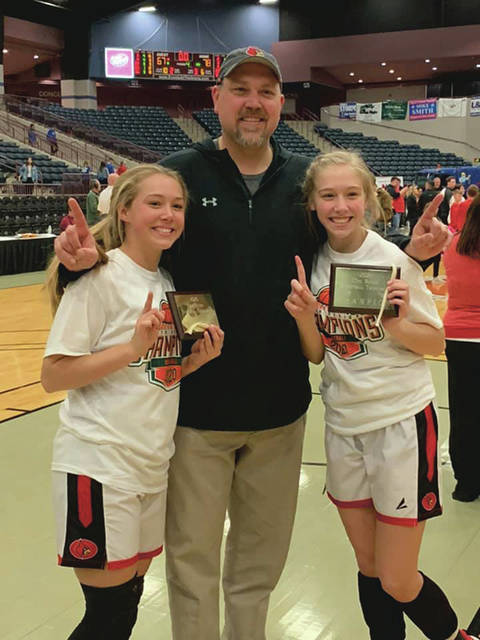 It’s the dream of any Kentucky teen who grows up playing basketball to some day make it to the big stage and play in the Sweet Sixteen. And for one London family, that dream has become a reality that has been carried on for three generations.

The Cox family will have three generations in the span of 55 years to play in a state tournament with the tradition beginning in 1965 with Raymond Cox.

Raymond played for Hazel Green, which later consolidated into Laurel County High School, in the Sweet Sixteen in 1965 and once again in 1966.

His son, Todd Cox, followed in his father’s footsteps, playing for Harlan in the state tournament in 1993 and again in 1995.

And now, with the Lady Cardinals, Emily and Lindsay Cox made their first appearance in the Sweet Sixteen on Thursday.

Though it’s any basketball player’s dream in the state to play in the Sweet Sixteen some day, Todd Cox said his biggest inspiration for making it to the state tournament was his father, who he said really paved the way for the Cox family.

“Kentucky basketball, anybody that plays or has any interest in it, that’s the highlight,” he said. “They call it the greatest show for a reason. Anybody that plays in Kentucky, that’s the goal. In the sports circle, you talk about it from elementary to middle up to high school and that’s the ultimate goal is to win the region and play in the state tournament. Growing up and playing, that was always what you wanted to do as a player.

“But for me, I wanted it even a little bit more because of the stories I heard from my dad. I always wanted to one up dad. It made me want it that much more.”

And now for Emily and Lindsay, the two have drawn their own inspiration from the stories they have grown up listening to about their grandfather and father.

With the two each playing in the state tournament twice, Todd and Raymond believe they know exactly how the sister duo felt heading into Thursday’s opening round of the tournament.

“When I see them (Lindsay and Emily) out there playing, I know what it’s like and I kind of know what my dad was feeling when he watched me play,” Todd said. “It brings back that hunger to do your best. To see them want it like they do, it just brings those competitive juices back and it really makes you appreciate what you’ve been through and my girls being able to go through it too and have that sense of accomplishment is amazing.”

Raymond and Todd are hoping that Emily and Lindsay truly soak in all that the state tournament has to offer.

“I hope they go down there and have fun, take in all the sights and the sounds,” Todd said. “Playing in Rupp Arena where UK plays and all the greats have played, I want them to feel that sense of accomplishment that I did. When you work your butt off and you accomplish that it gives you a lot of motivation to accomplish other things in life.”

“I’m so excited and can’t wait for them to experience it,” Raymond said. “I just hope that they cherish it and remember the things that happen.”

Emily and Lindsay have dreams of going far in the upcoming state tournament and plan to enjoy every experience that comes along with it.

“Being a freshman and having the opportunity to go and play at the state tournament, it’s just an amazing experience,” Emily said. “I’m so blessed to have amazing seniors and a wonderful coach and a wonderful team to help me get to where we are now.”