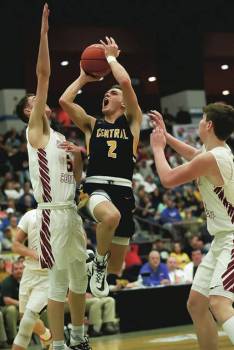 <p>Photo by Les Nicholson</p> <p>Knox Central senior guard Zach Patterson went up for a shot in the 13th Region Tournament championship game Monday against Harlan County. Patterson scored 25 points to lead the Panthers in a 72-68 victory.</p> 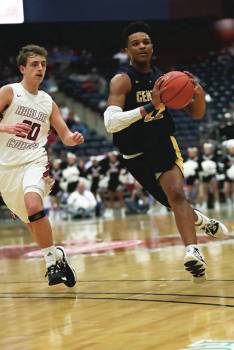 CORBIN — The Knox Central Panthers spent 49 years chasing an elusive 13th Region Tournament title before breaking through last season. The Panthers liked their first trip since 1970 so much they are going back next week, even though it wasn’t easy. Knox Central (25-8) rallied from a 14-point deficit in the first quarter and an 11-point deficit in the fourth quarter to claim a 72-68 win over Harlan County on Monday in the championship game at The Arena in Corbin.

Senior guard Zach Patterson and junior guard Jevonte Turner teamed for all of Knox Central’s points in an 11-5 run after Harlan County had built a 63-59 lead with 3:31 to play. Patterson scored 25 points to earn most valuable player honors for the tournament. Turner added 21 points after being held to four in the first half.

Harlan County (24-11) was its own worst enemy down the stretch. The Bears turned the ball over five times in the fourth quarter and missed five of their last seven free throws after hitting 11 of their first 12.

“We got up 10 in the first quarter and 10 to start the fourth quarter,” Harlan County coach Michael Jones said. “I hate it for these kids. No disrespect meant to Knox Central, but they didn’t win that championship, we gave it to them. We attacked and got to the lane but stepped to the line late in the game and missed five or six that could have put it away. We started being passive and shying away from contact, then for whatever reason we left Patterson open. It’s beyond me why we would leave him open like that. He played well and hit some big shots.”

Jackson Huff’s third 3-pointer of the game gave the Bears a 60-49 lead with 6:04 to play. Senior forward Kevionte Turner started a 10-0 run at that point with a three-point play. The Bears missed four straight free throws during the run, including the front end of a bonus. Jevonte Turner’s three-point play cut the deficit to 60-59 before Taylor Spurlock hit one of two at the line and Trent Noah hit a jumper in the lane to push the lead back to four. Patterson took over at that point, hitting a 3-pointer with 1:44 to give Knox a two-point lead. Tyler Cole answered for the Bears. Patterson and Cole traded buckets again before Jevonte Turner scored again with 18 seconds left. The Bears turned the ball over and Knox put the game away with two Jacob Abner free throws.

“We felt coming over it was meant to be and we were playing well enough to win this tournament, but we just gift wrapped it to Knox Central,” Jones said.

Harlan County had success early with its box-and-chaser defense with Jackson Huff focused on Turner, and the KC standout didn’t take a shot in the opening period as the Bears raced to a 20-6 lead. Huff hit two 3-pointers in the run, while Tyler Cole and Jacob Wilson added one each. Knox cut the deficit to 22-12 at the end of the period as Patterson and Kevionte Turner had baskets.

A Spurlock basket gave the Bears a 24-14 lead in the opening minute of the second period. Neither team scored over the next two and a half minutes, but the Knox offense heated up at the point while the Bears’ offense stayed cold. Knox reeled off 13 unanswered points, led by two baskets each from Patterson and Kevionte Turner, to go ahead 27-24. The Bears missed eight straight shots during the run and turned the ball over four times. A Noah basket in the final minute of the half finally ended the drought, then Spurlock found Josh Turner for a basket as the Bears took a 28-27 lead into the break.

“I wasn’t happy that we were only ahead by one at the half and Turner only had four points,” Jones said. “We left some other guys open who hurt us.”

Patterson credited the HCHS defense for his team’s slow start.

“They are good,” Patterson said of the Bears. “Mike is probably the best coach in the region. He doesn’t get any credit. They have good talent, but I’m telling you that he gets it done. He’s underrated in my book.”

Harlan County went almost exclusively to penetration on offense in the third quarter and stretched its lead to 53-43 by the end of the period as Noah and Spurlock each had three baskets and Cole added two. HCHS hit nine of 16 shots in the quarter, while Knox hit six of 14.

Knox Central speeded up its offense in the second half, and even though the Bears thrived in the fast pace for a while it may have hurt them at the end with the missed free throws.

“We tried to speed it up a little and get in their legs,” Patterson said. “They got a little tired and missed some free throws. We made some plays at the end, but they had a good gameplan and they could have easily won. We finally figured out what to do late in the game and got some easy looks.”

Noah scored 20 to lead the Bears and was followed by Cole with 17, Spurlock with 13 and Huff with 10.

The Bears will be among the regional favorites next season with Noah, Cole, Huff and Turner returning, along with several key reserves from a strong junior varsity squad that finished 12-5.

“We have three starters and a sixth man coming back, plus some kids off the bench who got some valuable experience,” Jones said. “We have a lot of work to do if we want to get back to this position.”