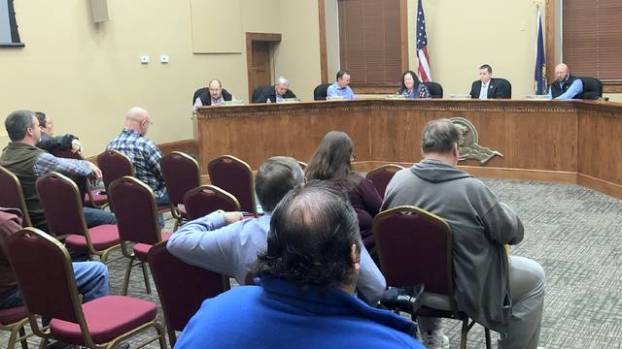 Harlan County Fiscal Court members heard an intriguing pitch involving regional tourism on Tuesday. Backroads of Appalachia board member Jim Wills was present to give a brief summary of the nonprofit’s goal and vision, as well as to answer questions for those in attendance.

“Backroads of Appalachia is a group that is working on a variety of things in the tourism field. Specifically here in Harlan County, they’re working on an initiative to bring motorcycle enthusiasts to the county. We’ve received a proposal from them that I’ve also placed in your packets,” Mosley said to the magistrates.

“Backroads of Appalachia is a nonprofit organization that works to bring economic development and opportunity to the poverty-stricken areas of Appalachia for motorcycle and motor-sport destination touring. Our goal is to pull highway traffic outside to local areas to enjoy the scenic highways, towns, hospitality, attractions and historical sites, all while bringing new revenue and employment opportunities to local businesses and residents,” the proposal reads.

Mosley said the proposal also asks for Lynch to be the headquarters for Backroads of Appalachia, with its board of directors renting a portion of the railroad depot to use as a welcome center for $500 per year. He added the portion they are asking to utilize does not interfere with The Bulldog Room or other areas where occasional activities take place.

“We are willing to secure a policy of insurance to provide $1 million in liability coverage to the Harlan County Fiscal Court as an additional insurer,” the proposal continued. “We are hopeful and optimistic that this proposal will be acceptable and we will be able to work closely to make Harlan County an exciting motorcycle and motor-sport tourist destination bringing prosperity in its wake.”

Magistrate Paul Browning III said upon doing “basic research” he has seen multiple city and county officials recommend the organization over and over again, “all with high praise.”

“A quick overview of that would be the road that leads through Cumberland, Benham and Lynch, across the highest point of the mountain and down onto the other side Appalachia on Highway 160, they’ve trademarked as the ‘Dragon Slayer’,” Browning said. “I don’t see any downside to their proposal. The space they are asking for is a very small portion of the depot.”

He also noted the page “Dragon Slayer Hwy 160” on Facebook has nearly 5,000 likes and follows.

“Everything we do, we’re going to focus on using local people,” Wills said. “As an example, when I leave here, I’m going to go see Miss (Julie) Pitts at Willing Hearts, where they do beautiful stained glass and pottery. You have an opportunity to showcase some of their things.”

Wills said the group plans to hire multiple people to work in the welcome center, as well.

Mosley said he appreciates Wills’ and the other board members efforts to utilize things already established in the area.

“The ability to bring more people here is something we strive to do through all of our tourism entities,” he said. “I think the only thing that needs to be figured out is if this is something you collectively like and access to the actual area. The third thing is our operations and maintenance agreement with the Harlan County Tourism Commission regarding that whole property.”

Mosley said the agreement was made to cover Portal 31, the depot, campgrounds and more, so the tourism board would need to be in agreement with the fiscal court to bring the organization into the area. County attorney Fred Busroe explained that as long as the tourism members are on board, all the county would need to do as a landlord is accept it.

Mosley said the court could vote to accept the proposal contingent upon establishing an agreement with the Harlan County Tourism & Convention Commission, but they would still need to bring a lease forward for approval and to authorize the judge-executive to sign, as well.

“There’s going to be another step in this process, even if the tourism commission wasn’t involved in this picture, the lease agreement would be an instrument that Fred (Busroe) is going to have to help us with before anything can be executed,” Mosley said.

Wills said the board has no opposition to move forward with the appropriate legal actions to include the tourism commission in the agreement.

“We have a passion to do this. If we’re not in the depot, that’s not going to stop us from doing anything. We’re still pushing the area,” Wills said.

After further discussion, a motion was made to approve the Backroads of Appalachia proposal contingent upon the approval of the Harlan County Tourism & Convention Commission, at which time the fiscal court would offer an amendment to the original agreement related to the Portal 31 operations to move forward with the lease agreement.

For more information on the organization and other road to cruise, visit www.heartofappalachia.com/appalachian-backroads.