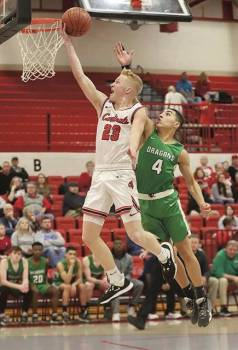 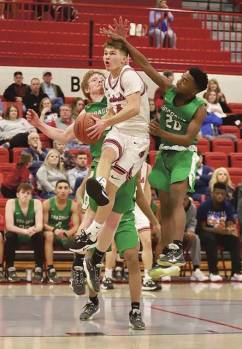 LONDON — South Laurel captured its 11th win in a row after upending Harlan on Tuesday, 66-45.

The Cardinals (22-4) jumped out to a 20-8 advantage in the first quarter and never looked back during their 21-point victory over the Green Dragons.

“I thought we came out and played well defensively,” Davis said. “Offensively, we were sluggish a bit. It was one of those games where some guys were missing easy shots that didn’t go in. Credit Harlan for playing hard and never giving up, though. That’s a sign of a well-coached team. They’re very athletic and a good team.

”I think our guys showed some maturity tonight. We were able to play guys off the bench and they were able to get some experience. I was proud of our effort, but it was really a sloppy game.”

The Green Dragons were without the services of leading scorer Jordan Akal, who had to sit out due to an ankle injury.

“Jordan is one of the top players in the region,” Davis said. “We prepped for him, but he wasn’t able to play. He’s a hard player to contain and he makes everyone around him so much better. I hope he gets healthy.”

South Laurel will be back in action on the road Thursday at 7:30 p.m. against defending 13th Region champion Knox Central.

“Knox Central is very talented,” Davis said. “They’ve got athletes and they can shoot the ball. We are going to have to play our best to win. It’s going to be a tough game and another test for us.”