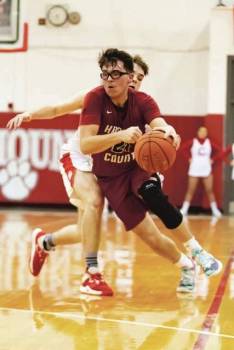 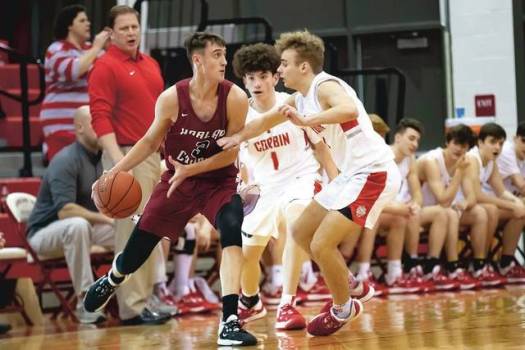 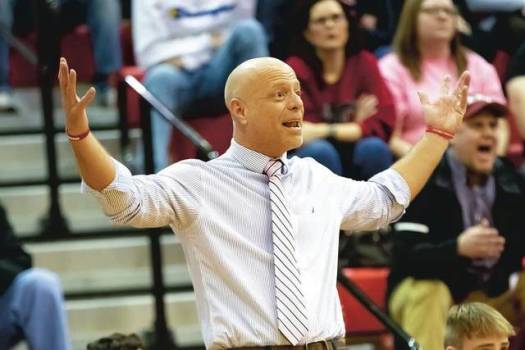 <p>Les Nicholson | Corbin Times Tribune</p> <p>Harlan County coach Michael Jones expressed his displeasure with a call during Friday’s game at Corbin. Jones was happy in the end as the Bears improved to 14-5 with a 74-67 victory.</p>

CORBIN — There are times when the shots won’t fall. This is the warning the Harlan County Black Bears have heard countless times, a typical way to caution a team that likes to shoot 3-pointers.

There are times, however, when the shots do fall for a lineup that features five good shooter. That was the case Friday as the Bears shot a blazing 61 percent (14 of 23) from behind the 3-point line in a 74-67 win at Corbin.

“We knew coming in they were a really good shooting team,” Corbin coach Tony Pietrowski said. “We tried to do some things we thought would help, but they shot it well and that was the difference in the game, obviously.”

“We shot the ball well, but I told them during a timeout that the shots won’t always fall and we have to keep being aggressive to the basket, and we did a pretty good job for the most part,” added Harlan Count coach Michael Jones. “We are just taking too many plays off defensively, and we’ve got to correct that. This team has to learn to play hard every possession. When they figure it out, we’re going to be all right.”

The win was the seventh straight for the Bears, who improved to 14-5 overall.

“There are things I’m upset with, but the first thing I told them was that any time you can come over here and get a win at Corbin it’s a great win,” Jones said.

Seniors Ales Byrley and Matthew Taylor scored 23 and 18 points, respectively, for the 11-8 Redhounds. Byrley kept the Hounds In the game in the third quarter as he scored their first 13 points, while hitting six straight shots.

“I called timeout and asked them if they could figure out who he was,”Jones said. “Even out of our matchup we’re supposed to guard him. He did a great job for them.”

Corbin got as close as three by the end of the third quarter and closed to within two early in the fourth period after two free throws by Byrley. Wilson had two baskets In the period for the Bears, who slowly pulled away down the stretch as Noah, Cole, Spurlock and Wilson each hit free throws.

“It seems we get close then miss an assignment or have a turnover,” Pietrowski said. “This has hindered us all year long. We have to get better in those areas. We’re not young, but we are inexperienced and we have to clean some of that up.”

Both teams were red hot early, combining to hit eight-of-eight shots as HCHS led 9-8. A 3-pointer by Huff and baskets from Spurlock and Noah gave the Bears a 19-15 lead after one quarter.

HCHS continued its 3-point onslaught in the second quarter, hitting five of six. Spurlock had a four-point play and.a trey and Noah hit two 3-pointers in an 18-7 run that gave HCHS a 37-25 lead. With a 10-point lead and the ball in the closing seconds, the Bears tried to hold for one shot but turned it over twice, leading to Taylor layups that cut the deficit to 37-31 at halftime.

Harlan County overcame a seven-point deficit with a 16-0 run in the fourth quarter on the way to a 58-51 junior varsity win.