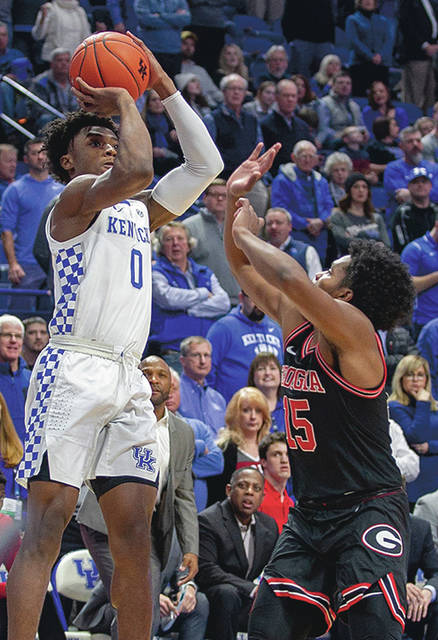 Ashton Hagans, who led Kentucky with 23 points, lines one up on the baseline Tuesday against Georgia.

LEXINGTON (KT) — Ashton Hagans always seems to turn it up a notch against Georgia.

With several of his family members in attendance, including his mother, Hagans scored 23 points and just missed a double-double with nine assists to lead No. 15 Kentucky to an 89-79 win over the Bulldogs on Tuesday night to complete a regular-season sweep.

“It’s always good to go against my home state team,” said Hagans who graduated from Cartersville (Georgia) and was Georgia’s Mr. Basketball and Gatorade Player of the Year two years ago. “I committed there one time and then came here. It’s good to have my family here to see me play and go against some of my homeboys.”

Kentucky coach John Calipari was pleased with Hagans’ performance against the Bulldogs and said his defense sets him apart from other guards in the nation.

“Ashton is as good a point guard — my opinion the best point guard in the country and the reason is how he defends,” Calipari said. “He can go shut out any of the three guys, whoever he needs to guard, pick-and-roll defense, dribble handoffs, all the stuff, being able to keep people in front, getting his hands on balls.”

Although Hagans is known for his defense, Immanuel Quickley drew the defensive assignment against Bulldogs star Anthony Edwards who scored all of his 16 total points in the second half.

“Immanuel’s become that other defender for us,” Calipari said. “If you remember a year ago it was hard to keep him in games because he was getting beat on the dribble so much. Now I’m putting him on the best player. One of the best three-point shooters in the country.”

Hagans scored 13 in a 78-69 victory over the Bulldogs in Athens earlier this month and tallied 23 in last year’s 69-49 victory last season. In three games against his home state school, Hagans has scored 59 points, dished out 18 assists and grabbed 12 rebounds.

“I just try to put on a show because I know everybody is watching,” Hagans said, “I just try to go out there and play my game, have fun, laugh and play against my home team.”

Overall, Hagans has been a consistent performer for the Wildcats this season and largely because of his steady contributions at point guard, he is one of the main reasons Kentucky has become more of an empowered team during the past two weeks. It started in last weekend’s 73-66 victory at Arkansas.

“This team became empowered during that last game,” Calipari said. “And now I think they’re feeling that it’s about each other. … But it is way easier to play and it is way easier to coach, but they got to be responsible to each other, they got to do their role, they can’t break things off and do what they choose and if they do, they got to be on each other. You’re empowered. You clean that up yourself. If someone’s not happy with playing time, I’m telling them to go to Ashton and Immanuel, talk to them (it’s) their team.”

Hagans has dished out at least five assists in 15 straight games and just missed out on 10 against the Bulldogs, which wasn’t a concern to his coach.

“At the end of the day he was mad Johnny (Juzang) didn’t shoot it because he wanted another assist,” the Kentucky coach said. “That’s why I grabbed him. I know why did you that and got mad. You wanted another assist, you’re going to lead our, the school in assists in our history, so stop it. Just play basketball.”