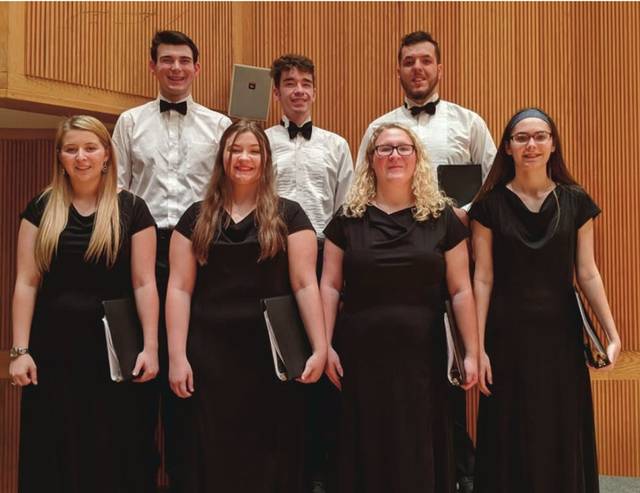 Seven Harlan County High School Choir students were selected to participate in the University of Louisville Honor Choir held recently on the campus at the prestigious Comstock Hall.

Students were recommended by their director and accepted into the choir by Kent Hatteberg, professor of music at U of L and director of Cardinal Singers and University Chorale.

There were three schools from KMEA District 10, which includes school districts across southeastern Kentucky participating. Those participating schools were Harlan County, Clay County and Lynn Camp. There were only 200 students from across the state selected.

Choral works for this year’s honor choir paid tribute to two great composers. This year marks the 250th anniversary of the birth of Ludwig van Beethoven and the 50th birthday of American composer Eric Whitacre. The repertoire for this year’s festival consisted of music from both composers. All five movements of Beethoven’s Mass in C Major Opus 86 were performed with orchestral accompaniment. The performance required both vocal and audience stamina as it takes 40 to 50 minutes to complete. Also, Whitacre’s works, Cloudburst and Sleep were performed.

Beethoven’s Mass in C Major was composed in 1807 and considered part of his middle work. Some music scholars claim it to be a forerunner to his famous 9th Symphony.

“For a high school student to be able to sing a mass in its completion is a rare occurrence,” said Jeanne Ann Lee, director of the HCHS choir and districtwide programs. “It is something that is nearly unheard of even for a college level performer. For our students from rural southeastern Kentucky to have this experience is exceptional and something I hope they will always remember.”

HCHS senior James Pinkley described it like this, “U of L honor choir 2020 was absolutely spectacular. Dr Hatteberg was a phenomenal director, and the music was next level. It almost felt like a rite of passage to perform a full Beethoven Mass for the first time in my artistic career. I’ll never forget it.”

Whitacre is among the world’s best-known living choral composers. One of his innovations was the creation of a virtual choir where vocalists from all over the world sing together via technology. His most recent virtual choir consisted of 5,905 singers in 101 countries.

In Cloudburst, composed when he was 21, Whitacre set the poetry of Octavio Paz to his choral composition hoping to conjure a rainstorm over parched earth. Cloudburst garnered Whitacre a Grammy award. Sleep, is an a cappella setting of Charles Anthony Silvestri’s poem of the same name. Whitacre utilizes cluster chords with extremely close harmonies to provide beautiful dissonance and emotional color.