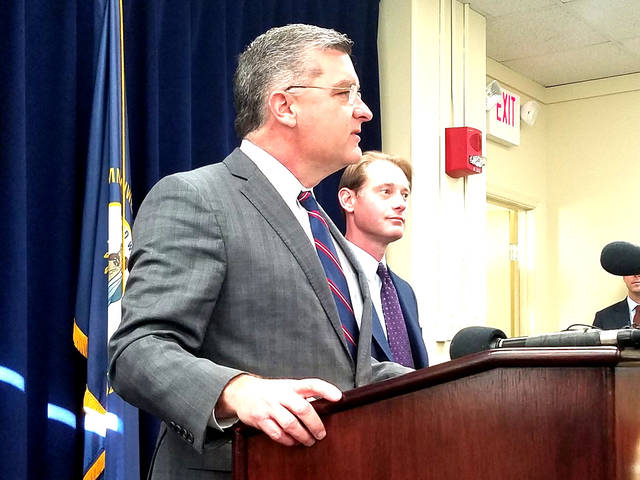 Mills, who is sponsoring the bill, says everyone is asked in their daily lives to show a photo ID, and cited examples: “To claim a package or mail from the U. S. Postal Service, to pick up UK ball game tickets at will call, to enter a military base, to travel by plane or train, to purchase alcohol and tobacco products, and to open a bank account or cash a check.”

He continued, “I believe the requirement of a photo ID to vote, increases public confidence in the election process.”

While a photo ID at the county clerk’s office costs $30, Mills says, “Senate Bill 2 provides for a no-fee standard personal identification card, for individuals who are at least 18 years old, do not have a valid drivers license or CDL, and is eligible to vote.”

Adams says he campaigned on the issue of requiring a photo ID and won the November election, “Because voters agreed with my message about securing our elections and enhancing public confidence in our process.”

He calls the bill an excellent start, and a work in progress that will be improved by deliberation in committee and on the floor in both chambers.

“I encourage public input from across the spectrum on how we can improve this bill,” Adams stated. “Success for me is not spending my four-year term arguing over the constitutionality of this bill in court. That would be good politics for me, but bad policy. I want a bill that passes court muster, goes on the books and is actually implemented.”

Adams noted that the bill, unlike those passed in some other states, also allows the use of college photo IDs, as well as military and other federal photo IDs.

He says the current system is flawed. “As a matter of law, a poll worker is allowed to ask for a photo ID, but they don’t have to ask. And if they do ask, you don’t have to provide one.”

Responding to claims that requiring a photo ID is a form of voter suppression, Adams said, “I don’t think it’s suppression to tell people they need an ID to get into the Capitol.”

Corey Shapiro, Legal Director for the ACLU-Kentucky issued a statement in opposition to the bill:

“The day after Kentucky celebrated the 100th anniversary of expanding the right to vote to include women, the Kentucky Senate declared it a priority to restrict voting access. The voters elected the legislature to solve the real problems facing this Commonwealth. There is no evidence that in-person voting fraud is a problem in Kentucky, as evidenced by not a single credible instance of voter fraud in the close election last fall.

“Mandating photo identification will exacerbate the difficulties Kentuckians already face when voting, particularly the disabled, minorities, the elderly, and hourly workers. 11% of all U.S. citizens and 25% of African-Americans lack government-issued photo identification. While this law will allow people to get such identification without upfront charges, the state will use a significant amount of taxpayer dollars to create the IDs and educate the public about the need for photo IDs. There will also be hidden costs to those needing new identification, such as time and money spent to get the identification and the

underlying documents needed to acquire an ID. Indiana spent more than $10 million to produce free ID cards between 2007 and 2010.”

No word yet on when the bill will be taken up in the Senate.