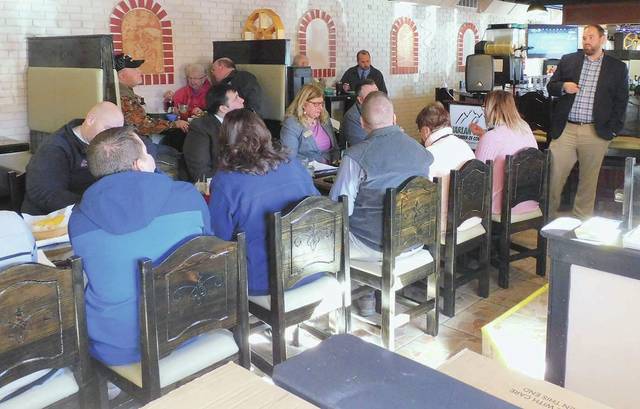 Harlan Tourism Executive Director Brandon Pennington addressed the Harlan County Chamber of Commerce on Wednesday, showing those in attendance everything the tourism industry has to offer and a special glimpse at a project still in the works.

Harlan Tourism Executive Director Brandon Pennington took the floor during the Harlan County Chamber of Commerce meeting on Wednesday to speak on the various benefits of the tourism industry, including how it can help bring life back into the region.

“Our mission is to promote and attract visitors to our beautiful mountain hometown through tourism development, marketing programs, attractions, infrastructure, downtown development, quality of life, creating an engine for great economic impact, strengthen pride, becoming a destination and fortifying a vibrant brand locally, regionally, statewide and nationally,” Pennington said. “Our vision is to become an adventurous, vibrant and thriving playground for visitors and locals alike.”

Pennington said when an area has a flux of new visitors coming in and they are spending money, it creates a need for more employees to be hired and perhaps new businesses to meet their needs.

“Through that, we nurture small businesses,” he said. “One of the coolest things about Harlan Tourism is that we can’t be outsourced. You can’t go to Michigan and experience Harlan. We’re the only ones that provide the authentic Harlan experience.”

Pennington said tourism also provides a better quality of life by hosting events, supporting festivals, promoting local attractions, enhancing both the local and visitor experience. Pennington went on to explain what the tourism commission actually does in Harlan, noting it is a “driving force” of the economy as he presented figures to those in attendance.

In his presentation, Pennington showed a slide while describing how tourism brings “new dollars into our community,” which has a higher economic impact than local spending on its own, offering tax relief on the local economy.

“Harlan is one of the biggest revenue strings for Kentucky,” he said. “Tourist spending accumulated about $11.25 billion in 2018. When you drill that down to a local level, you’re looking at 318 jobs in Harlan. That seems kind of low, but that is only the full-time jobs, so when you break it down more, you’re looking at about 500 to 600 jobs, including part-time.”

Pennington added the labor income is about $6.6 million, with a tax offset of $2.51 million, totaling everything for roughly a $33 million economic impact for tourist spending in Harlan County.

“In our area, in southeastern Kentucky, we are about the fifth highest-grossing revenue stream of tourism CBB’s out of about 20 counties. That’s great,” he said.

Pennington said aside from the figures, tourism welcomes new visitors to Harlan County through the Harlan Center in the downtown area, hosts events/festivals both inside and outside the building and handle a lot of the promotion for Harlan alongside the Evarts, Cumberland and Harlan County Tourism Commissions.

Pennington eventually reached a slide in his presentation where a rough-cut promotional video was shown to those in attendance. He added the video has only been shown to a handful of people, but he hopes to release it to the public within the coming weeks on a number of platforms, such as Facebook, the tourism website and at conventions throughout the region and surrounding areas.

For more information on the Harlan Tourism and Convention Commission, contact Pennington at the Harlan Center by calling 606-573-4495.