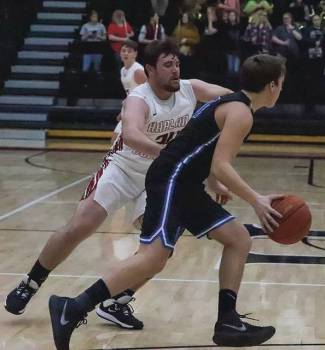 <p>Kim Henson | Harlan Enterprise</p> <p>Harlan County junior forward Josh Turner guarded a Letcher Central player in Monday’s game at HCHS. Turner had seven rebounds in the fourth quarter as the Bears rallied from 10 down for a 55-50 victory.</p> 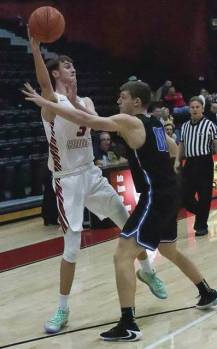 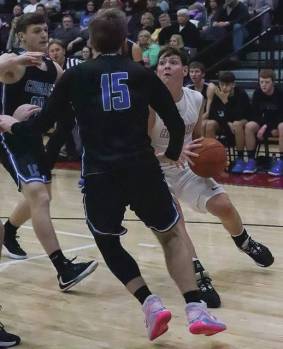 If there was one positive for the Harlan County Black Bears to take away from their first-half performance Monday against visiting Letcher Central was the realization they couldn’t play any worse. The Bears shot 18 percent (five of 28) from the field and missed all 12 of their 3-point attempts in falling behind 22-12.

“We got good looks, and I was trying to get them to be more aggressive and kick it out and try one that way. We’re making the same mental mistakes we’ve been talking about. They just weren’t ready to play, and we can’t afford to take nights off,” Harlan County coach Michael Jones said. “People can leave tonight and say whatever they want to about this team not playing well and they’d be correct, but I’m extremely proud of the effort they gave the second half. We could have folded and quit, but they didn’t.”

The loss was a microcosm of the Cougars’ 3-9 start this season, which has included several hard-fought losses.

“I’ve been coaching 12 years and I can’t understand why we are being shunned from victory. I can’t explain it,” Letcher Central coach Winston Lee said. “I’m praying the Good Lord shows me how to get through this. We’ve been in every game this year but one. We have been up by 10 and up by 12 like tonight, but we can’t find a way to finish. All we can do is keep pushing and hope this work we’re putting in pays off some way.”

Senior guard Taylor Spurlock scored eight of his team-high 19 points in the fourth-quarter comeback as HCHS hit eight of 16 shots after connecting on only nine of 39 through three quarters.

“Taylor finally woke up the second half, and I was proud of the way he responded after I got on him,” Jones said. “He was a lot more aggressive on offense the second half.”

Sophomore guard Jackson Huff hit a pair of clutch 3-pointers in the final 3:10 in his 10-point performance. The first trey put HCHS ahead for the first time, and the second extended the lead to four with 1:15 left.

Junior forward Josh Turner had seven of his team-high nine rebounds in the fourth quarter.

“He plays as hard as he can every possession and he’s always in the right place,” Jones said. “I though his effort in the fourth quarter really sparked us.”

A steal and layup by Matt Dicks cut the deficit to two with 44 seconds left. Spurlock hit one of two at the line with 27.1 seconds to play for a three-point lead. Letcher was unable to get off a shot that could have tied the game as Tyler Cole stepped in front of a pass in the closing seconds and took it in for a clinching layup.

Harlan County missed its first 13 shots and fell behind 13-0 before an Elisha Smallwood basket in the closing seconds of the period cut the deficit to 11. Jones took out all his starters midway through the period, but the second unit struggled just as much as the first.

A 3-pointer by Williams gave Letcher its biggest lead at 22-10 late in the second quarter before two free throws by Trent Noah cut the deficit to 10 at halftime.

Harlan County got as close as six on a 3-pointer by Noah with 4:13 left in the third period, but Letcher answered again and pushed its lead to 38-28 going into the final period.

Letcher Central turned the ball over five times in the fourth quarter and missed all seven of its free throws in the game.

“If we can make two or three free throws we could have put them in a bigger bind,” Lee said. “I am frustrated at that and the fact we gave up some offensive rebounds.”

Harlan County returns to action Thursday at Perry Central and then will play Montgomery County on Saturday at 5 p.m. in the Bobby Keith Classic at Clay County.