Knott rallies from 13 down to defeat HCHS 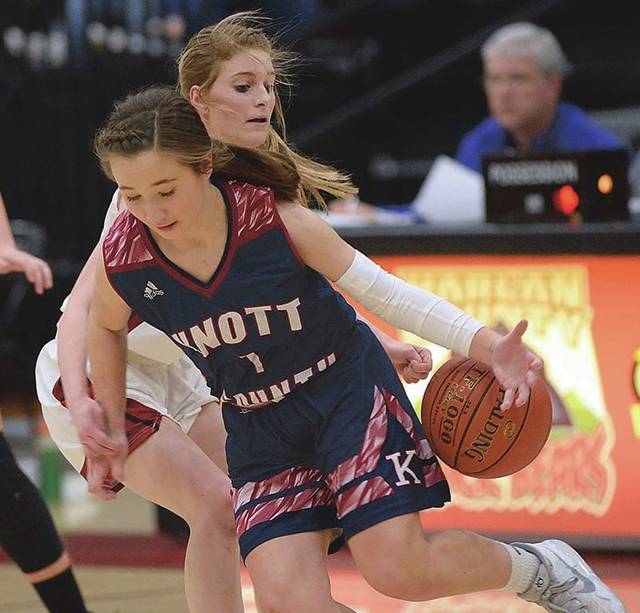 With seven victories in their first 10 games, the Harlan County Lady Bears rarely looked good in winning but always won the battle of effort and intensity — at least until Friday.

Harlan County watched a 13-point second-quarter lead disappear against visiting Knott Central. The three-time defending 14th Region champions, pulled away in the fourth quarter by outhustling the Lady Bears, who struggled to cover Knott’s 3-point shooters and keep up with the Lady Patriots getting down the floor. Knott used a 9-0 run in the fourth quarter to pull away for a 79-70 victory.

“I thought we looked tired in the second half,” Harlan County coach Debbie Green said. “We were slow reacting and slow getting back. Not everyone struggled, but we can’t afford to have any weak links. Our rotations were terrible and we left people open, and you can’t do that against a good team like Knott Central.”

“We feel like we have seven starters, and we finally found the right rotation,” Knott Central coach Jeff Honeycutt said. “This is a young team this year and this is a big win for us.”

All five starters for the 7-6 Lady Patriots reached double figures, led by Keara Mullins and Abby Maggard with 16 points each. Natalie Slone added 14 and was followed by Kylie Gayheart with 13 and Presley Fletcher with 10. Brooke Mason came off the bench to add nine points on three 3-pointers.

Blakley had six baskets in the first quarter as HCHS built a 23-19 lead in a fast-paced first quarter. The lead grew to 33-20 as Jaylin Preston and Wood each hit 3-pointers. Knott missed its first eight shots from the field in the quarter but eventually heated up with the help of two 3-pointers from Gayheart and cut the deficit to 43-39 at halftime.

Two baskets by Blakley helped Harlan County stretch its lead back to eight in the third quarter before Knott fought back again, taking a 57-55 lead when Mullins hit a buzzer-beating 3-pointer.

Knott beat the Lady Bears back for three layups during their decisive fourth-quarter run while also hitting a pair of 3-pointers.

The Lady Bears fell behind 21-5 after one quarter in junior varsity action and battled back to within two in the final minute before falling 44-39.