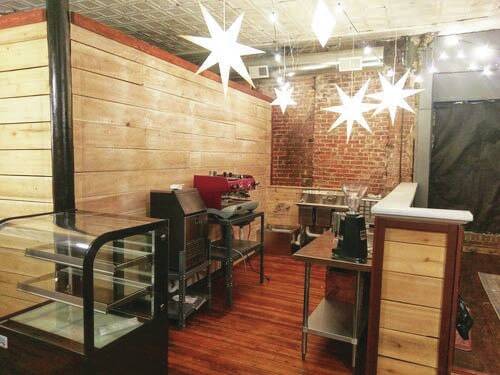 Courtesy of Geoff and Sky Marietta

Geoff and Sky Marietta are opening Moonbow Tipple & Sweets in the Buttermore Building in downtown Harlan.

Editor’s Note: Geoff and Sky Marietta are opening Moonbow Tipple & Sweets in the Buttermore Building in downtown Harlan. Sky has written about their journey creating Appalachian magic in this historic building. This is the first of a three part series. This story is insight of the Mariettas start in Harlan — how they came to own the building.

We are so excited to be opening up a coffee shop in downtown Harlan. It is a long-time dream come to fruition, but there is quite a story behind how we came to own the building, renovate it and ultimately occupy it. We are not even open yet, and so much has happened. I am going to share how we became the owners today.

You may have already read my post about how our family came to own a historic downtown building in Corbin. We renamed the building “Second & Main” and had started the renovation process, with the goal of creating an event space and retail store. We were putting in the work and trying to stretch our dollars – renovation is always more expensive than you think. That is when Geoff received a message about the Buttermore Building in Harlan.

If it had been any other building, in any other location, I think this is a message that would have been ignored. But when we moved to Harlan County in 2015, Geoff began looking for a vacant downtown building to repurpose, and his focus was on Harlan. The building he fell in love with was the Buttermore Building, with its historic brick façade perched on Main Street.

It was built in 1897 as Harlan’s first hotel, and the grandeur of its original purpose could still be felt. At that time it was for sale, but at a price we simply could not afford. The list price plus the renovation costs were beyond our family’s capacity for financial risk.

Again, Geoff felt called to invest in the downtown of Harlan. He loved that the Buttermore still had the original stage, and he saw it as a place that could be a community center. He knew how often he went to Harlan and needed a place to perch for awhile to do some work or have meetings, and felt Harlan needed a coffee shop. What a vibrant addition that could be to Harlan, particularly given the strength of the arts. Neither one of us had a specific passion for coffee or a dream of opening a coffee shop; instead, it felt like a community need that we could meet.

Not to be deterred by the asking price, Geoff looked into the records on the building, figured out who owned it, and wrote them a letter. He outlined his vision for the Buttermore Building, and detailed renovation costs. He explained what price would make the risk of buying the building balance with potential revenue. He then gave him a far lower offer, explaining that he meant it as no insult, it was just the best he could do with his available resources. The letter got sent off and he did not hear a reply. Months passed, life went on, and we learned about the old JC Penney building in Corbin.

Fast forward to 2017, with renovations underway in Corbin. On October 17—exactly 1 year to the date he had written his letter – Geoff got a call from the daughter of the building owner. She was trying to help her elderly father settle his affairs and asked him what he wanted to do about the vacant building he owned on Main Street. He reached into his files, pulled out Geoff’s letter, and handed it over to her.

Given that we were now busily renovating a different building, Geoff told her he was no longer interested in purchasing the Buttermore Building. And how could we? We did not have the cash on hand. Remember how Geoff tried to get a bank to finance us to buy Second & Main, and he had been rejected? Although the Buttermore was cheaper, Harlan was considered a riskier investment. He put out some feelers and it was pretty clear that we would not be able to get financing for this project, either.

But the owner’s daughter urged Geoff to meet with the family to talk about the history of the building. And, long story short, he ended up buying the building. Much to the credit of the Buttermore family, they cared more about the future of the town of Harlan than they did the amount of profit they could make from selling their building. Geoff presented them an innovative financing package. He paid them a dollar upfront to come to own the building, but worked out a deal where every year for the next 20 years he would pay them a percentage royalties of any revenue made within the building. They would also receive a guaranteed amount each year that was something we could afford – just under $1,000 per year. The family would then have some investment in the building. If it did well, so would they. It was a win-win.

Do you remember how I said Geoff felt called to renovate historic buildings to help build the economic future of the Kentucky Mountains? Well, this is the point where I get to tell you that being married to someone with a call is not easy. Geoff is very good at taking action on faith, on believing things will work out. Me, on the other hand…I tend to worry. I may have kindly suggested to Geoff that there was no such thing as an affordable historic building in need of significant renovation.

We already knew what it was like to put in electric, plumbing, and HVAC. Our finances were stretched tight with the work underway in Corbin. But he assured me that everything was okay, we would just own the building. There was no urgency to renovate, and we could wait until the timing was right to begin the coffee shop project.

In the meantime, the building could be used for some simple community functions in its current state. What was I going to say? He had dreamed of that building, and the generosity of the Buttermore family was humbling. The deal was done, and by the end of 2017 we owned both 2nd & Main in Corbin and the Buttermore Building in Harlan.

You can take a look at some of the pictures of the Buttermore as it was when we first bought it. There were no bathrooms, but it was able to provide a dry spot for folks to gather when the weather was warm enough. In February we hosted one of the early meetings for the Mega Mountain Mural project from the Appalachian Program at Southeast Kentucky Community and Technical College. The Kudzu Killers, a fabulous local band, played, and Robert Gipe led the meeting.

I remember sitting in that beautiful space and just picturing its future. Inspirational signs had been put up for the meeting, and my favorite one declared “poverty is not our story.” I could picture the people who would gather, the business that would be done. The songs that would be sung on stage and the poems that would be read. It was a wonderful feeling, and one that I would look back on again and again. That was fortification before the storm.

By spring of 2018 we were speeding up our timeline to help someone in need, and by the fall we were facing very serious financial difficulties from trying to renovate two buildings at once. In our darkest hour, we were saved by a gift from God. But that is a story I will save for next time.

Next up, the story on how the Mariettas renovated the Buttermore Building.