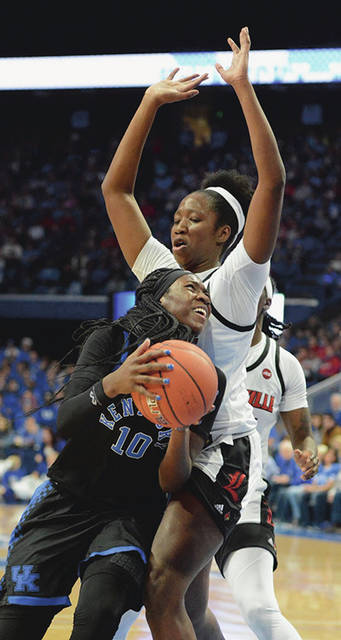 Rhyne Howard scored 26 points in Kentucky’s 67-66 loss to Louisville Sunday at Rupp Arena. Howard missed a trey at the buzzer that would have given the Wildcats a win over their instate rival.

LEXINGTON, Ky. (KT) —Rhyne Howard was the best player on the floor and Louisville coach Jeff Waltz was shocked after he watched Howard’s 3-pointer at the buzzer fall short in the Cardinals’ 67-66 win over Kentucky Sunday at Rupp Arena.

Kentucky coach Matthew Mitchell said Howard’s trey at the buzzer was the look his team wanted with the difference between a win and a loss hanging in the balance.

“Rhyne’s (three) was pretty deep, but it was a good look,” Mitchell said. “She makes them a lot, we were more than happy to have the ball in her hands at the end to take the (last) shot. It didn’t go, but she’ll learn from it.”

Much like Watlz and Mitchell, Howard expected a different outcome once the ball left her hands as time expired in front of 11,256 fans in the stands, who watched as the Cardinals outscored the Wildcats 27-15 in the third quarter and held on down the stretch.

“I think it was a pretty good look,” she said. “It looked good coming off my hands and I thought it was going in. I probably take that shot every year.”

Howard missed her first five shots but overcame the early adversity and led the Wildcats with 26 points. The sophomore forward paced Kentucky with 20 points in the opening half and like the rest of her teammates, struggled in the third quarter as the Cardinals rallied from a nine-point halftime deficit.

“They did a good job of blocking my shots when I drove it,” Howard said. “That was pretty much it.”

Although Howard is known for her basketball skills, Waltz is a big fan of her demeanor off the court.

“I had the opportunity coach Rhyne for two summers with USA Basketball and I say it all of the time, she is a phenomenal basketball player, personally, I think she is an even better person,” he said. “My wife and kids adore her. She is such a good person.”

As a team, the loss served as a learning experience after the Wildcats won their first 10 games of the season.

“It was a great time for us to play this game,” Mitchell said. “We found out a lot about what our team has and what they’re capable of. We certainly have flaws, but if we keep working at it, we will be a tough team and we will be a dangerous team as we progress through this season.”