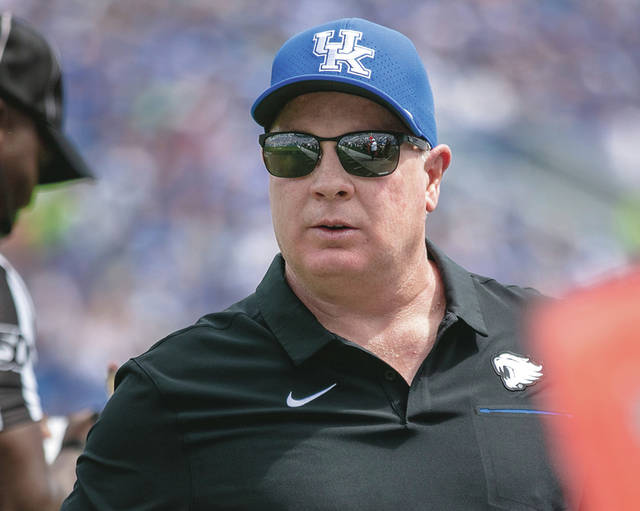 Kentucky coach Mark Stoops and the Wildcats will play Virginia Tech in the Belk Bowl on Dec. 31 in Charlotte.

LEXINGTON (KT) — Mark Stoops isn’t worried about his team’s placement in the postseason as he wraps the early-signing period recruiting visits.

Although rumored to play in the Gator Bowl in Jacksonville during the postseason selection process last weekend, Stoops is glad the Wildcats landed in the Belk Bowl that will be played in Charlotte at noon on New Year’s Eve.

“We have great leadership, and I leave that to them,” Stoops said Wednesday. “For us, we are looking forward to this opportunity. Our players, they’re excited to be here (and) coming to this bowl. It has such a great reputation. It’s a great city and you get matched up with a great Virginia Tech team, with the history that they have and their coaching staff. We’re excited to be here.”

The Wildcats (7-5) will take on Virginia Tech (8-4) in the first meeting between the two teams in more than three decades. Hokies coach Justin Fuente said facing the Wildcats will present a challenge especially against a “Stoops brother.”

Although Fuente has been impressed with Kentucky ’s defense, like many coaches, he has been impressed with Kentucky’s offensive make-over that led to three-game winning streak to close out the regular season. Receiver-turned-quarterback Lynn Bowden, who claimed the Paul Hornung award Wednesday, guided Kentucky to five wins in its last seven games.

Like his counterpart, Stoops said the Hokies will be a challenge, but is more worried about his squad as opposed to the name on the jersey and the team’s conference affiliation.

“For us, it’s just important win the last game, no matter who you are playing, whether it’s a league game or any opponent,” Stoops said. “Winning a bowl game is important. As far as the league affiliation, we don’t get real caught up in that and we gave great respect for them and their league and we’re only worried about ourselves and playing the best football that we can.”

“We would both like to send our seniors out the right way and take a step forward toward the next season,” Fuente said. “That’s the context of it.”

Both coach have been putting the finishing touches on the early recruiting season during the past two weeks and both have been in what Fuente called a “sprint.”

“We’ll get back at it this weekend,” Stoops said. “For us, it is a bit condensed. Our finals week goes up until Dec. (20), so that throws a little wrinkle in that week of preparation, where in years past, we have been able to practice during that week. We will be a bit condensed and we will need to have some good practices this weekend and give the players off and some time up until (Dec. 20) and try to sneak a late practice in on (Dec. 19) and give them a couple of days off for Christmas and then report (to Charlotte) on Dec. 26.”

Fuente added both teams will have plenty of time to prepare for the contest.

“We’ve got a little time to figure out how we’re going to approach it,” Fuente said.

Virgina Tech last played in the Belk Bowl in 2016. Fuente and the Hokies trailed Arkansas 24-0 at halftime before rallying in the second half and escaped with a 35-24 victory over the Razorbacks.

“We had a great senior class that really wanted to win the game and we did not play well in the first half (and) Arkansas did play well,” he said. “It was not a situation where we were sleepwalking through the first half. We had great leadership and we were just not playing very well.

“Our guys really responded at halftime and really came out and played up to our ability in the second half and we were able to win the game. We made a lot of memories that week off the field leading up to the game and on the field during the game.”