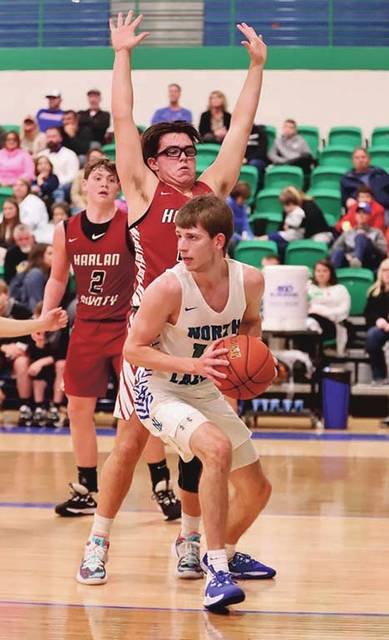 North Laurel guard Cole Kelley looked for an opening as Harlan County’s Jacob Wilson defended in action from the Legacy Nissan Classic at North Laurel on Saturday. Kelley scored the decisive basket with one second left as the Jaguars won 66-63.

LONDON — From Jackson to Hazard to London, the Harlan County Black Bears have opened the 2020 season with three brutal road tests as coach Michael Jones tries to speed up the growing process for a squad that lost three starters from a year ago.

The Bears emerged victorious against Breathitt County and Perry Central, both ranked among the top six teams in the 14th Region. The win streak ended against North Laurel in the final game of the Legacy Nissan Classic, but the Bears put up quite a fight against the Jaguars, who entered the season as the No. 1 team in the Cats Pause 13th Region poll.

“Nobody can say we’re dodging anybody. We’ve played three tough teams,” Harlan County coach Michael Jones said. “I think this is a learning experience for us. We just can’t wait three quarters to start playing like we did tonight.”

Senior guard Taylor Spurlock continued his torrid start to the season with 23 points.

“It took him a while to get going, but we have to do a better job of getting him the ball, both as coaches and teammates,” Jones said. “He didn’t even touch it at times in our offense and he has to do that.”

Tyler Cole added 14 for the Bears, while Trent Noah and Jackson Huff contributed 12 each.

Harlan County led most of the first quarter but struggled against pressure in the second and third quarters and trailed by as many as 13 in the third period. The Bears battled back from nine down to one with a barrage of 3-pointers — two each from Huff and Spurlock and one from Noah. Four straight free throws by Cole put the Bears up by one with 58.5 seconds left.

Sheppard hit two at the line and Spurlock connected on one of two to tie the game with 11.4 seconds left. Spurlock blocked a Sheppard shot, but the ball went out of bounds and the Jaguars had one last chance with 3.4 seconds left. Kelley took the inbounds pass and sliced across the lane for a basket and foul. Noah got up a shot from halfcourt that was off the mark as time expired.

HCHS raced to a 7-0 lead behind Spurlock and Noah as North missed its first seven shots from the field. The Bears still led by five with two minutes left in the period when North reeled off consecutive 3-pointers from Nate Bruner, Kelley and Sizemore to go up by four.

The Bears turned the ball over five times in the first half of the next period as the Jaguars built a 12-point lead, at 36-24 by halftime. Sheppard had three baskets in the period. Sizemore added a pair of 3-pointers from the same spot in the corner as part of a nine-of-18 period for North.

“Harlan County has some great guards, but we were able to turn them over and that got us going,” North Laurel coach Nate Valentine said. “(Sizemore) is lights out. He was in the gym this morning at 7:30. He gave us a big boost with Alexander out.”

“I thought we were ready when we started, but when they put a little pressure on us we acted like we’d never seen it before,” Jones said. “We dug ourselves too big of a hole. I’m proud of the way we fought back at the end, but we got down too much. We have to handle the ball better because teams will press us. We also have to do a better job of making shots.”

“Give credit to Harlan County for making a great run at us with eight of 13 on 3-pointers in the second half. That’s hard to do even when you aren’t guarded,” Valentine said. “I thought we moved the ball around today. I was extremely proud of the way we battled.”

Harlan County returns to action Tuesday in a girls/boys doubleheader at Bell County.