Cats, Cards to battle for The Governor’s Cup 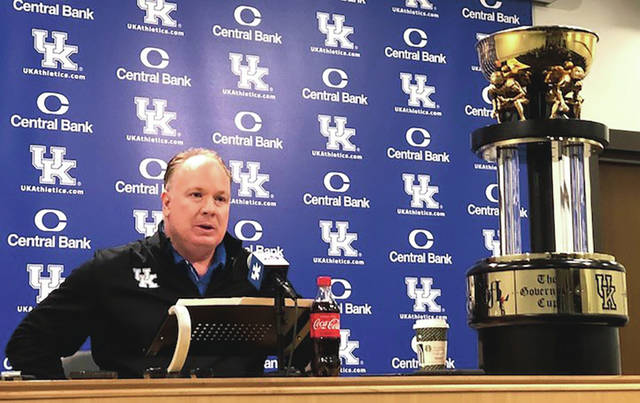 LEXINGTON (KT) — The stakes will be high when Kentucky and Louisville meet Saturday in the season finale for both teams.

In addition to bragging rights, the Wildcats and Cardinals are seeking better position positioning, considering both teams have already clinched bowl eligibility. Kentucky is seeking its fourth consecutive seven-win season, while Louisville is eyeing its eighth victory following last season’s dismal 2-10 campaign, including a rare and winless 0-8 mark in the Atlantic Coast Conference.

“I think it’s good that both teams are in a good position,” Kentucky coach Mark Stoops said Monday. “That hasn’t always been the case even with us. We’ve played them good at times and not so well at times. It’s about us elevating our program and getting better each and every year and that’s my focus — getting this program better and I know (Louisville coach Scott) Satterfield is the same way and he has them playing much better than they were a year ago and that’s for sure. There’s no denying that. It’s nice to see both programs in a good position and trying to do things right and a lot of areas and developing our programs.”

Stoops said there won’t be much of an issue getting his team prepared this week.

“I don’t think there’s any hiding from a rivalry game,” he said Monday. “There is going to be no problem getting both teams up and ready to play, but it’s really about the discipline and the execution. (Bulletin board) material goes out the window pretty quick because it could hurt you.

“Generally speaking, the (better) disciplined team will win. … the talking and the chirping really does you nothing but hurt you at times, We want them excited and we want them amped up and ready to go (starting) with our preparation.”

Kentucky (6-6) is coming off a 50-7 thrashing of UT Martin, while the Cardinals (7-4) rolled to a 56-34 win over Syracuse. A year ago, the Wildcats made it look easy, defeating the Cardinals 56-10, putting an exclamation point on a stellar regular season.

Stoops hasn’t been surprised by Louisville’s resurgence under Satterfield, who enjoyed similar success at Appalachian State before taking over as coach of the Cardinals earlier this year.

“His team is playing hard and they’re playing good,” Stoops said. “They’re playing very hard ad extremely tough. Not too long ago they were a Top-10 team. They’ve been pretty good and they still have a lot of talented players and they’ve done a remarkable job. I’m not taking anything away from that, that’s for sure.”

Stoops said the Cardinals are similar to his squad on the offensive side of the ball.

No matter the outcome Saturday, Stoops said he’s sticking with the Wildcats, despite coaching rumors that have circulated during the past two weeks.

‘We have unfinished business and I’m excited about the future,” he said. “That’s pretty clear.”

The early forecast for Saturday is calling for a 70 percent chance of rain. Kentucky has played three of its first 11 games in a downpour and has won two of those contests, including last week’s blowout win over UT Martin.

“It has been strange,” he said with a laugh. “It is what it is. I think everybody knows we’re going to throw the ball 50 times.”