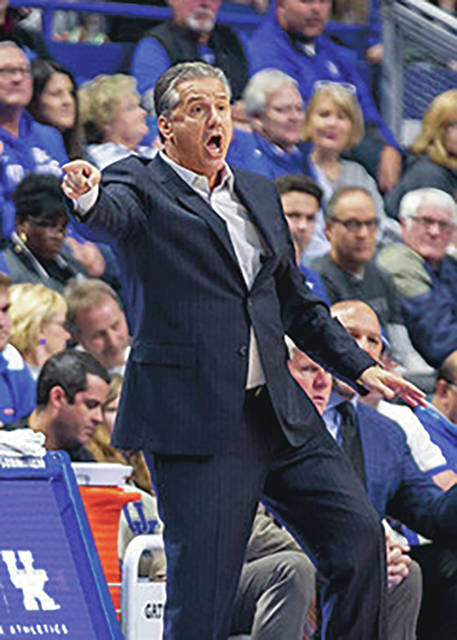 LEXINGTON (KT) — John Calipari’s offense has never been centered around the 3-point shot, but the Kentucky coach would like to see his team improve their 3-point shooting in the near future.

The ninth-ranked Wildcats (3-1) made just one on 12 attempts in an 82-74 triumph over Utah Valley earlier this week. Tyrese Maxey , who leads Kentucky with five 3-pointers this season, made the lone shot from long rage against the Wolverines.

Following the win over Utah Valley, Calipari said lack of production from long range is a concern.

“Our issue right now is you can’t go and make one three-point field goal,” he said. “(We’ve) got to go and figure out, okay, how are we going to do this? We had some guys (against Utah Valley) that were wide open and almost shot air balls that are kids that make threes.”

Calipari admitted that some of the team’s shooting issues are mental.

“(It) doesn’t seem like anybody else is having a problem with it,” Calipari said. “But we go through this every year. I think part of it is I’ve got to figure out maybe there’s an offense that we’re running that I just say we’re trying to get threes off. This offense is trying to get threes. Maybe we get into that.”

“We had a couple of games where we struggled from the three-point line also,” he said. “I think it’s just, early in the season, that can happen. We know Kentucky has great shooters, just like in our program when we had a game or two where we weren’t making them, we knew that we would shoot them better later.”

Immanuel Quickley, who missed Tuesday’s game because of a chest injury he sustained at the end of Sunday’s practice, is second on the team with three made 3-pointers. Kahlil Whitney and Nate Sestina follow with two each and Johnny Juzang has sank one 3-pointer this season.

“You cannot be afraid to miss,” Calipari said. “Even Nate (Sestina) was pulling back (against Utah Valley). That means you’re afraid you’re going to miss. You can’t play that way.

“I have to make shots,” he said. “Everybody has to make shots, especially when we are open. We practice it all the time. They are rhythm shots. I think guys legs were just tired, and my legs were tired. There isn’t any excuse for missing any open shots, but we will be good.”